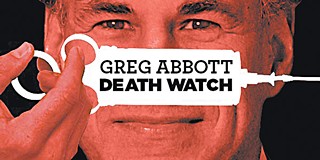 Manuel Vasquez's execution last Wed­nes­day didn't just mark the fourth such Texas-approved killing in 2015's first 10 weeks; it coincided as the second-to-last to occur by injection of the state's current supply of pentobarbital, a sedative the Texas Department of Criminal Justice uses in conjunction with other drugs to kill its death row inmates.

This is a problem for the state because, despite the recent stay of execution issued to mentally ill 55-year-old Randall Mays, it still names six other inmates on its execution schedule – with 42-year-old Kent Sprouse's April 9 execution serving as the last to happen on this particular batch. Making matters more difficult is that pentobarbital is not as easy to come by as it has been in the past. Lundbeck, the Danish manufacturer of the drug, outlawed its sale to American pharmacies in 2011 after learning that states were using it for executions (a practice Denmark abolished in 1993). Since Sept. 2013, the state has received its supply from unidentified compound pharmacies, with the last nine concoctions all coming from one location. TDCJ has been silent on the question of why it hasn't been able to go back to that same pharmacy.

"I remain optimistic we'll be able to carry out executions according to the schedule," Executive Director Brad Livingston told the Associated Press. "Time will tell."

A survey of the executioner's landscape shows that the drought's not just statewide. An execution in Georgia was halted earlier this month after prison officials noticed that the compounded pentobarbital looked cloudy, not clear as it should. And in Utah, a bill was recently passed that would re-allow death by firing squad in the event that the state could not come by the necessary drugs for lethal injection. (Those firing squads would be composed of five different police officers from the department that investigated the inmate's offending arrest, with one officer shooting a blank bullet, so as to mitigate the emotional weight of killing another person.)

One need look no further than Oklahoma and Arizona to see the troubles that accompany the use of less-preferred lethal injection cocktails. Last April in Oklahoma, a botched execution involving midazolam and two other drugs meant that it took 43 minutes for death row inmate Clayton Lock­ett to die from his injection. (Okla­ho­man executions are now barred by the U.S. Supreme Court until further review. The AP reports the state is considering the use of nitrogen gas.) Three months later in Arizona, two hours passed before Joseph Wood died from the injection of a different midazolam concoction. The Texas Tribune reported March 10 that TDCJ received 40 vials of midazolam last summer that won't expire until 2016.

TDCJ public information director Jason Clark said last week that the department is "exploring all options including the continued use of pentobarbital or alternate drug[s] in the lethal injection process" but added that he cannot "speculate on the future availability of drugs," leaving some to question how the department plans to procure an up-to-standards supply in such a short amount of time. It also raises concerns about transparency, and whether death row inmates should have the right to know in advance just what exactly is killing them.

State officials haven't disclosed the names of the pharmacies assembling these drugs since the process went from a one-drug protocol to a compound of drugs in 2013. Last May, while serving as state attorney general, Gov. Greg Abbott sided with the TDCJ in its efforts to keep the process private (after advocating for more transparency in earlier years), citing a "threat assessment" from the Department of Pub­lic Safety that classified compound pharmacies as easily accessible to the general public and "a soft target to violent attacks."

One legislator fighting for more transparency in this process is state Rep. Terry Canales, D-Edinburg. In February, he filed a bill – HB 1587 – that would require TDCJ to disclose – via website posting – the names of the substances used for executions, in addition to information concerning the substances' manufacturers, their expiration dates, and any available results of tests performed on the substances to state taxpayers. The bill would require such information to be made public at least 45 days before each scheduled execution, unless the TDCJ hasn't yet been able to procure the necessary drugs. In that case, a posting would have to be made more than 14 days before the execution for the scheduled killing to take place.

"In Texas, we do not give the bureaucrats the absolute authority to decide what the public can and cannot know about what their government is doing," Canales said in a statement. "When it comes to the death penalty, Texans will not allow state government to keep secrets about this drug, which wields the power of life and death."