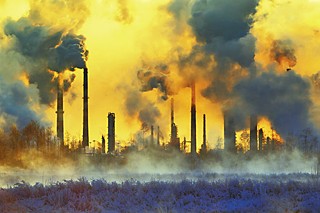 The term "smog" is said to have originated in London during the 20th century. At that time, fog and coal smoke periodically grew so thick that people walking along the Thames were known to wander off course and drown. The problem persisted for many decades; during the Great Smog of 1952, trains collided, prize cattle suffocated, and thousands of people died in just a few days, some passing away in their sleep. That emergency was a catalytic event for the modern British environmental movement, leading to passage of the Clean Air Act in 1956. The United States passed its own Clean Air Act in 1963, and Americans today have little cause to fear anything so dramatic as the Great Smog. Nonetheless, ground-level ozone – aka O3, the primary component of modern-day smog – continues to be unhealthy. That's why the European Union limits acceptable levels of O3 to 60 parts per billion, and the United Kingdom limits it even further, to 50ppb. In the United States, the limit is a more permissive 75ppb. But that could soon change.

Tuesday, March 17, is the deadline for public comments on the Environmental Pro­tection Agency's proposal to limit National Ambient Air Quality Standards (NAAQS) for O3 to levels between 65ppb (the current standard in Canada) and 70ppb. The EPA is also accepting comments on a stricter standard, set at 60ppb. The proposal is prompted by the CAA requirement that NAAQS undergo periodic review. However, the review won't necessarily result in a change – the EPA could decide simply to retain the status quo.

More than 1,000 newly published studies have accumulated since the end of the last EPA review process in 2008, helping to inform the agency's current recommendations. The newly proposed standards would be below "the O3 exposure concentration that has been reported to elicit a broad range of respiratory effects," according to the EPA's policy assessment report; however, a range of 65 to 70ppb is still above the threshold (60ppb) that is "the lowest exposure concentration demonstrated to result in lung function decrements [reductions] ... and pulmonary inflammation."

Speaking about the proposed standards before the Travis County Commissioners Court in February, Travis County Environ­ment­al Quality Manager Tom Weber explained that "elevated ozone levels make it harder for even healthy people to breathe." But O3 is most problematic for people with existing health conditions and for the young, the elderly, and anyone who works or is active outdoors. That's why Sierra Club member Scott Johnson works with the Parks and Recreation Department to post signs along hike-and-bike trails on high ozone days. The idea, says Johnson, is that "if someone has information, then they might throttle back their run or their walk or their bike trip." Still, it's unclear whether many people act on such information. Direct mitigation of O3 – which is generated by the reaction of sunlight with pollutants released by cars, power plants, and other industrial sources – is more important. However, the effects of mitigation are hard to assess, Johnson notes, "because of the influences and impacts coming from outside of our borders."

Pollution "doesn't stop at city limits," said Samantha Alexander, a spokesperson with the city of Austin. "We approach it as a region," she noted, pointing to the Capital Area Council of Governments and the Central Texas Clean Air Coalition, which represent the Austin-Round Rock metropolitan statistical area. The MSA is among several in Texas that hover in "near-non­attain­ment" of O3 standards. According to CAPCOG data, O3 in the five-county, 13-city region reaches "unhealthy" levels (60ppb and above) one out of every six days in September.

Recent years appear to have seen improvements. Although Central Texas logged 24 days in the moderately unhealthy range in 2014, O3 levels remained below 75ppb throughout the monitoring season – a first in at least 17 years. However, ozone levels vary so significantly from year to year that it's hard to confirm legitimate trends. At the end of 2013, CAPCOG adopted the Central Texas Ozone Advance plan, under which regional jurisdictions have agreed individually to a variety of outreach and mitigation initiatives (e.g., carpooling programs, idling ordinances, and energy conservation measures). But even within the plan, there is language acknowledging the difficulties of meeting ambitious targets: "The region is poised to be in a position to meet a new ozone standard if it is set as high as 70[ppb] by 2018, but would be challenged to meet one as low as 65[ppb]."

If Central Texas were to go into nonattainment, "the purse strings of federal money could be yanked," noted Weber in his presentation to commissioners. CAPCOG has issued a similar warning. "The regulatory consequences of a non­attainment designation could last for 25-40 years," according to a December press release. "New regulations could restrict industrial expansion, delay funding for roadway construction, and increase the cost of doing business throughout the region." CAPCOG declined to comment ahead of a meeting scheduled for this Wednesday, March 11, at which the CAC was to consider a draft comment letter to the EPA. Like the CAC, anyone wishing to weigh in on the matter has only a few days left.