The GOP refuses Medicaid expansion and moves to slash taxes

The Freedom to Be Sick

Lt. Gov. Dan Patrick has compared Texas' refusal to accept Medicaid expansion to the Lone Star State's secession from Mexico. On March 2, in a press conference nominally led by Sen. Charles Schwertner, R-George­town, Patrick declared "Texas independence from overreaching federal mandates like Obamacare." The event was meant to publicize the sending of a letter, signed by Patrick and all 20 Senate Republicans, asking Pres­ident Obama for greater state control over the Medicaid budget. Schwertner said the number of people covered has risen from 2 million in 2002 to 4 million now. Meanwhile, state funding has risen from 12% of the state budget in 1989 to 29% this year. He argued that money should instead go to public safety, roads, and public education. The solution? Expanded health savings accounts, allowing Texas to collect copayments, and forcing work requirements on some claimants. As for Medicaid expansion, he said that is "simply not worth discussing." Health advocacy group Cover Texas Now immediately fired back that the state should stop blaming the feds for their bad policies. Noting that Texas has "one of the most bare bones Medicaid programs in the country," the body countered Schwert­ner's headline numbers by noting that enrollment growth has mostly come from kids, meaning the rate of uninsured children in Texas has dropped from 25% in 1997 to a still-unacceptable 13% in 2013. CTN, which represents 13 health care advocacy bodies including Texas Associ­a­tion of Community Health Centers, March of Dimes, and Tex­ans Care for Children, argued that all the Senate's proposals had been tried and failed before, and that cutting health care while pushing tax cuts "represents the wrong priorities for Texas."

Taxes aren't exactly the most popular part of government, so when Gov. Greg Abbott promised $2.2 billion in property tax cuts, and a further $2 billion in business tax cuts, it was bound to play well to the peanut gallery. When the Senate Finance Committee met on March 2 to discuss those cuts, Chair Jane Nelson, R-Flower Mound, was even more bullish, claiming she could produce $5 billion by the end of the session. Sen. Paul Bettencourt, R-Houston, who has seemingly stepped in to replace his predecessor Dan Patrick as the chamber's most aggressively anti-tax zealot, said this is simply delivering what voters demanded. However, there's a long way to go before any cuts are actually passed, and Monday's discussion centered on what to do with the margins franchise tax. Sen. Kevin Eltife, R-Tyler, reminded everyone that he voted against it when it was first passed, and every fear he had about it has come to pass. Top of that list, as Sen. Kirk Watson, D-Austin, reminded everyone, was that it created a structural debt in school finance. Schwertner's solution to this Gordian knot was to simply get rid of it and just push sales tax up a penny – even though that will hurt working-class Texans hardest.

More schadenfreude, as former fiscal conservative senators bemoan the level of deferred maintenance in their state offices. Comptroller Glenn Hegar has talked publicly about rabid bats inside the building, and holes stuffed with toilet paper, while Attorney General Ken Paxton has a leaking roof over his servers... House Ways & Means Chair Dennis Bonnen, R-Angleton, is pushing for quick passage of border security bills, as DPS deployments to the border are leaving holes in law enforcement elsewhere... Krispy Kreme franchise Glazing Saddles celebrated Texas Independence Day at the Capitol with a Texas flag made out of 1,836 doughnuts... Rep. David Simpson, R-Longview, has filed HB 2165, a bill to end marijuana prohibition, saying that it should be "regulated like tomatoes, jalapeños, or coffee." In a release, Simpson – a Christian conservative – wrote, "All that God created is good, including marijuana. God did not make a mistake when he made marijuana that the government needs to fix." 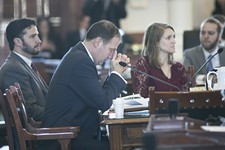