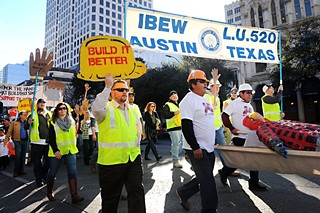 Protesters rally Feb. 25 to commemorate hundreds of Texas construction workers killed on the job during the "Day of the Fallen" event hosted by the Workers Defense Project since 2011. Demonstrators called on Texas lawmakers to provide safe working conditions and fair pay for laborers. (Photo by John Anderson)

City Council meets today, March 5, with a short agenda that includes a couple of thorny Items: the Garza Ranch zoning case that confounded them last week, and possibly a vote on the Decker Lake/Long Metropolitan Park golf course proposal. See "Council: Not Enough Hours in the Day."

The Jumpolin piñata store demolition story proceeds, as the landlords, F&F Real Estate Ventures, have been unable to persuade anybody to use the now-empty space, and the former tenants and store owners, the Lejarazus, were granted a temporary injunction by Travis Co. Judge Karin Crump pending a trial on their lawsuit. See "Jumpolin Supporters Claim a Victory," Newsdesk, Feb. 27.

Amplify Austin begins today, the annual "I Live Here, I Give Here" festival of philanthropy and inspiration for Austinites to support their favorite local nonprofits (March 5-6). Check out the Chronicle's daily reports on the various groups looking for your encouragement and dollars: austinchronicle.com/daily.

Lt. Gov. Dan Patrick unveiled his first round of education bills on March 3, including measures that will grade schools on an A-F scale. However, there's no sign yet of his threatened school choice (i.e. vouchers) bill, or the pre-K funding that Gov. Greg Abbott declared a priority.

Winter Storm Thor may have settled over the Ohio Valley, but its chilly impact continues to be felt in Austin, with over 80 ice-related crashes over the weekend, and Bergstrom Airport canceling all arrivals on Tuesday morning due to fog.

Nurse Nina Pham, one of the Dallas medical professionals who contracted Ebola while treating Thomas Eric Duncan, is suing Texas Health Resources for failing to train and protect employees treating the disease, and for violating her privacy by releasing details and video of her treatment.

Private prison company Management and Training Corporation is facing a federal investigation into conditions at the Willacy County Correctional Center in Raymondville, where inmates rioted in February over medical care. All inmates (approx. 2,800) have been relocated.

The U.S. Supreme Court heard arguments Wednesday in King v. Burwell, the lawsuit aimed at undermining Obamacare by claiming only state exchanges can offer low-income subsidies for health insurance – should the suit succeed, the program would likely become unsustainable.

Rep. Dave Simpson, R-Longview, filed a bill Monday to effectively legalize marijuana and make the plant regulated by the state. "Everything that God made is good, even marijuana," Simpson said, equating the crop to tomatoes, jalapeños, and coffee. Few think the bill stands any chance of getting passed, but it's good to have a pipe dream.

Gene Vela was found not guilty on all counts after jury deliberations Wednesday. Vela, 31, was arrested in Nov. 2013 after threatening police with a weapon. He faces five years to life for aggravated assault on a public servant. His attorneys maintain that authorities did not follow proper response protocols, and have argued that Vela's post-traumatic stress disorder stemming from a stint in the Marines contributed to his response.

Jurors in federal court were out Wednesday deciding whether or not APD Officers Eric Copeland and Russell Rose exercised excessive force when they arrested Carlos Chacon in April 2011. Chacon called police that night after witnessing a prostitution ring at a Studio 6 motel off I-35. When police arrived, they placed Chacon under arrest. Copeland landed two punches on Chacon in the process, and Rose used his Taser, one of the probes hitting Chacon.