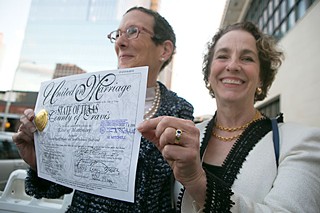 By now, they're nearly household names in Texas, identified by supporters on the street for their historic partnership. Sarah Goodfriend and Suzanne Bryant, the Aus­tin lesbian couple who quietly wed in a ceremony outside Travis County offices last week, ignited a firestorm of opposition from state officials, yet spurred renewed hope for those fighting for marriage equality.

Over a light lunch Downtown on Monday, the first legally married gay couple in deeply conservative Texas said they're adjusting to the newfound recognition and staying strong in the face of the state government's hostile reaction. "Here we are and nothing's crumbling; Armageddon hasn't happened; and the sky's not falling down on Texas," Goodfriend told the Chronicle. "Maybe the folks who are most fearful and concerned by gay marriage will be able to breathe a little easier."

Last Thursday morning's ceremony, officiated by their rabbi, was not the couple's first attempt at tying the knot – they tried eight years ago, but were denied a license by Travis County. Then in 2014, anticipating a favorable ruling in DeLeon v. Perry, which challenged the constitutionality of Texas' same-sex marriage prohibition, they positioned themselves on standby for a ceremony. However, Judge Orlando Gar­cia stayed his injunction against the ban pending further appeal. But last week, the stars finally aligned for the partners of 30 years.

When Travis County Probate Judge Guy Herman found Texas' ban on same-sex marriage unconstitutional as part of an estate case on Feb. 17, the couple's attorney Chuck Herring seized on the brief window of opportunity. Two days later, Goodfriend and Bryant secured a temporary restraining order from District Judge David Wahlberg, ordering Travis County Clerk Dana DeBeau­voir "to cease and desist relying on the unconstitutional Texas prohibitions against same-sex marriage as a basis for not issuing a marriage license." In making the order, Wahlberg factored in Goodfriend's medically fragile state – diagnosed with ovarian cancer in May, her "future remains uncertain," according to court documents. "Plaintiffs have no adequate remedy at law for the damage and the continuing harm that this course of action is causing them and will continue to cause them, and thus the only remedy available to plaintiffs is the issuance of a temporary restraining order," wrote Wahlberg.

Bryant recalls her younger daughter's concern with missing history class for the 9am ceremony. "I told her, if this happens, you'll be making history," she said. The whirlwind day was surreal, according to Goodfriend: "I was elated and thankful, but also completely incredulous." The news swept the state and made national headlines, a cause for celebration among gay activists and proponents of equality.

However, anti-LGBT state leaders swiftly dampened the celebrations. Attorney Gen­er­al Ken Paxton filed and was granted a temporary emergency stay by the Texas Supreme Court to halt any future same-sex marriages in Travis County, claiming the "inevitable disruption" caused by the couples' order would present "potential harm not just to [the state] but to the plaintiffs themselves and to the public interest at large."

Paxton next took aim directly at Good­friend and Bryant, filing a second motion to invalidate their license. Paxton argued Wahlberg "abused" discretion and took "rogue action" in granting the TRO and not notifying the AG first, and by not recognizing the Texas Constitution's 2005 ban on marriage equality or waiting until other legal challenges to the ban are resolved. Therefore, the marriage should be void to prevent "legal chaos," Paxton wrote in his petition. "This ruling may cause same-sex couples to seek marriage licenses across the state, and county clerks may mistakenly rely on that order to begin granting such licenses. If that occurred, the harm to the couples, state officials, and the general public would be difficult if not impossible to undo."

Adding more fuel to the fire, state Sen. Charles Perry, R-Lubbock, filed legislation Friday that would redirect the process of obtaining a marriage license from county clerks' offices to the secretary of state – a pointed reaction to the lesbian newlyweds.

Herring, who has until March 12 to respond to the court, continues to defend the couple's marriage. "In our view it's a backdoor attempt to attack the validity of a marriage that has already occurred – the marriage is done, our clients are married and joyful," he told the Chronicle. He called Paxton's legal attacks "cold-hearted, uncom­passionate, and legally wrong." If Paxton did want to dissolve the marriage he would need to file a new suit – however, going after a woman with ovarian cancer would be nothing short of "hard-hearted," said Herring. Further, Herring contests the notification issue, claiming the AG's office was aware of the probate case ruling and chose not to intervene.

DeBeauvoir, understandably hesitant to comment in light of the pending litigation, similarly defended the license's legality, telling the Chronicle she has "every reason to believe the license is valid and unassailable." Lauded by the couple and others for her bravery, DeBeauvoir contended she was simply following orders – albeit happily. "I think the one license we did, and the message it sent, was very clear," she said.

Despite his ruthless effort to enforce marriage inequality, Paxton's legal fight has yet to sour the wedded bliss. "I think it's a bit mean-spirited of them to try and take away our marriage license," said Bryant. "In the last decade, society has changed so much and people's attitudes have changed so much." Goodfriend added, "We had a religious ceremony, so separate and apart from this legalese, we are married in the eyes of God – you can't roll back the tape emotionally on that experience."

Of course, the couple has had three decades of building a strong relationship to withstand the attacks. Goodfriend, now a volunteer legislative policy advisor to Rep. Celia Israel, D-Austin, and Bryant, a local adoption attorney, were introduced to one another by a mutual friend in 1984. Goodfriend, studying for a graduate degree in economics at UNC Chapel Hill, and Bryant, a Duke Law student, sparked over dinner, discovering a shared passion to make a difference in the world. After working in D.C. for some time, the native Texans returned to their home state's capital in 1992 to care for Goodfriend's aging parents, and eventually settled down, raising their two adopted daughters, 18-year-old Dawn and 13-year-old Ting.

The urgency of marriage arose during Goodfriend's cancer diagnosis; when she was rushed into emergency surgery, the partners began to feel the necessity of a lawfully recognized marriage. "I wanted Suzanne to avoid the kind of agony that [Sonemaly Phrasavath of the estate case] is being put through right now. Having to fight in court at the same time you lost your partner – no one should have to experience that," said Goodfriend, who ended her last chemotherapy session four months ago. Crucial medical decisions, burial arrangements, maintaining residence on one's homestead, and retaining community property are among the practical and legal benefits gay couples don't have by right or law.

Grounded and thoughtful, the partners demur at the "star" label assigned by some, deflecting the attention to the symbolic wedding license and the struggle still facing the thousands of other unwed gay couples in Texas, who are awaiting a decision from the 5th Circuit Court of Appeals – which still has yet to rule on the Texas ban after hearing oral arguments in early Jan­u­ary – and ultimately, the U.S. Supreme Court, scheduled to take up the issue this summer.

"At first I felt a little bit shy and awkward about being the first gay couple to marry – I was sad that others couldn't join in yet," said Bryant. "But when young gay and lesbian couples came up to us with tears in their eyes, thanking us for stepping up to the plate and telling us they hope to get married one day too, I began to understand what it meant for others."

Texas is "just one of the holdouts," she continued. "I think everyone knows that [marriage equality] is going to happen. Maybe we're taking some of the heat now to lighten any pushback for others later."

The couple said they've been met with overwhelming support from the local community – even from some unlikely advocates (including conservative Republican friends and family). The day after their wedding, the couple received a congratulatory card decorated with wedding rings on the outside and a simple message inside: "It's about time." The unexpected sender was none other than their mailman. "And that's Austin. That's the epitome of Austin," said Goodfriend.