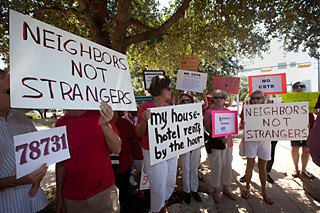 Organic gardener and longtime Austin resident Bob Easter is proud of his two short-term rental properties: two- and three-bedroom houses in the Allandale neighborhood, with eco-landscaped yards full of drought-resistant flowers that he says neighbors pull over to admire. His renters never have more than a single car, and Easter says he prefers these visitors to the long-term renters who often damaged the property with pets and parties.

For now, his short-term rental properties, classified as Type 2 (non-owner occupied, aka commercial), are 100% legal. He holds licenses to operate them, and pays quarterly city and state hotel occupancy taxes on the income. However, opponents of the STR ordinance say properties like his aggravate local issues of affordability, quality of life, and the "commercialization" of their neighborhoods.

In 2012, Austin was one of the first cities in the U.S. to comprehensively address the new market created by websites such as Vacation Rentals by Owner, HomeAway, and Airbnb. City Council approved, by 5-2 vote, an ordinance to make these short-term rentals (defined as fewer than 30 days) an option for homeowners seeking some rental income. Legally, only 3% of available housing stock per census tract is allowed to be used as vacation rentals.

"It's like marijuana," said Jerry Rust­hoven with the city's Planning and Devel­op­ment Review Department. "People are already doing it. So you can either make it illegal, and go after everyone, or set some rules and regulate it." Rusthoven was one of the architects of the ordinance, which basically goes as follows: Pay the annual licensing fee, stay current with your city and state hotel occupancy taxes, and don't run afoul of the neighbors.

However, not everyone in Austin is happy with the law as it stands. "People have heartburn over short-term rentals, for many reasons. This is just one of those issues that makes people come unglued," said Mary Ingle, president of the Austin Neighbor­hoods Council. Comparing commercial STRs to "mini-hotels," Ingle said they're responsible for a host of neighborhood ills, including noisy parties and unmanageable parking, and said she'd like to see the new Council revisit the ordinance completely.

Aside from neighborhood heartburn over Type 2 rentals, another problematic area is the enforcement of the ordinance requiring operators to be licensed and pay their taxes. Since beginning its enforcement efforts, the Code Department has begun investigations into 1,089 housing units, and has succeeded in bringing 72% of those into compliance with the ordinance. But in a presentation to Council last week, Austin Code Director Carl Smart admitted to the difficulty of a comprehensive solution. "How do you identify an STR?" said Smart. "That's part of our challenge."

HomeAway Inc., an international company employing 900 people locally, also helped shape the ordinance. Co-founder Carl Shep­herd said, "The city of Austin should pat itself on the back for its work on short-term rentals," citing the 72% compliance rate of code enforcement as a national best.

But a provision in the ordinance also allows would-be STR operators to advertise their properties without first being licensed – as a hypothetical means of testing the market before investing in the license – and that provision has made Code Enforce­ment's job doubly hard. In a statement from Austin Code, Assistant Division Manager Marcus Elliot said the department "also recommends an increased licensing fee for identified unlicensed ordinance violators and establishing penalties for expired licenses." He also said neighbors should report troublesome short-term rentals by calling 3-1-1.

An open question is how far the new Council will go to revisit what the previous Council decided in 2012. Mayor Pro Tem Kathie Tovo – one of the two dissenting votes – reiterated her opposition. "At a time when rents are skyrocketing and many Austinites are facing higher housing costs, allowing 3% of our housing stock to be used as mini-hotels within our neighborhoods was a very significant policy decision – and not one with which I agreed," Tovo said in a statement that also indicated how she would like to tackle the issue: "As the ordinance has been in place for some time now, it's appropriate for the city to review the program and provide a comprehensive financial analysis along with an evaluation of any impact [that] commercial short term rentals have had on our neighborhoods." Mayor Steve Adler similarly expressed his willingness to review STRs: "I would not be opposed to us taking a look at how [the ordinance] has operated."

By contrast, Shepherd of HomeAway said if Council amends the ordinance at all, it should abolish the $285 annual licensing fee. "I personally believe the fee is needless friction when the goal is to get all STR operators licensed, and to have taxes supporting the city and state. The high cost of the fee flies in the face of transparency," he said, "by setting people up to be bad actors by giving them reason not to be licensed."

Among his recent clientele, Easter lists traveling nurses, grandparents, and summer camp counselors who come to stay for one to three weeks at a time. "It's something that brings increasing revenue into our city and state," he said. "I just don't understand why we would want to take away something like that."

Feb. 28 is the deadline to apply for or renew an STR license in time for SXSW. See full info on the program – including a tool to look up how many Type 2 STRs are in your neighborhood – at www.austintexas.gov/str.