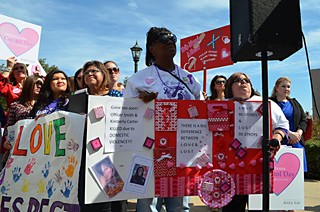 A conversation about teen dating violence is long overdue, according to the numbers. Love Is Respect, an online resource for young people to learn about dating violence and to find help, reports that one in three teenagers will experience dating violence before they turn 20. In fact, girls between the ages of 16 and 24 are at the highest risk of any demographic group – three times higher than the national average – for intimate partner violence.

Yet many adults are not addressing this topic with the young people in their lives. "Too often, adults tell kids that they can't have the kinds of feelings they're having because of their age," explains Gloria Terry, CEO of Texas Council on Family Violence. "This message contributes to the disconnect between parents and youth, leaving space for unhealthy or violent behaviors between young people to take root."

"Our fear is that victims will confuse early warning signs and red flags for romance, or 'puppy love,'" says Jennifer Blackman, the director of development and communications at the Texas Advocacy Project. "If they're not caught early, the violence can escalate to physical or sexual abuse. Imagine a teenager hearing an abuser say, 'If you don't do this with me, I will tell everyone you're a slut.' Or, 'Why do you make me do this?' These are all forms of emotional abuse that are tricky to spot."

It's for those reasons that local organizations, including TAP and TCFV, have worked tirelessly to get laws passed to help promote education and eradicate domestic violence at the teen level. In spring 2007, the Legislature passed HB 121, which added Section 37.0831 to the Texas Education Code. With this addition, it became mandatory for every school district in the state to adopt and implement a dating violence policy. Schools must be able to define the different types of dating violence and also be equipped to address the issue. This includes providing teacher and administrator training; school enforcement of emergency protective orders, which teens in Texas can now legally apply for on their own; and alternatives to protective orders.

In 2010, Break the Cycle – a legal resource for teen domestic violence victims – gave Texas a C on its State Law Report Card. Recommendations for improvement included changing the law to allow teens to apply for "stay away" orders – as emergency protective orders are colloquially known – and to "allow minors to access all sensitive [i.e., contraceptive, abortion, and other medical] services without parental involvement." That first change has since been implemented; contraception and abortion remain, of course, thorny issues in Texas.

Now, as the first state to pass a law requiring schools to address domestic violence, Texas would seem to be slightly ahead of the curve. However, there are some real-life inconsistencies in the implementation of Section 37.0831. Heather Bellino, TAP's executive director, admits that only a few school districts are actually currently following the code.

"We know [schools] have a lot of curriculums to get through, so we're not slamming them," Bellino explains. According to a Sam Houston State University study from 2013, 64.6% of school districts do not provide information on dating violence awareness. "As I understand it, it's not 'Why aren't you doing it?' because we know there's barriers. We just haven't identified them well enough yet to help these schools implement HB 121."

The silver lining is that the schools enforcing the policy – specifically in Round Rock ISD, Dallas ISD, and Austin ISD – are doing so exceptionally well. Several Austin schools have a Teen Dating Violence Aware­ness Week every February, which frequently includes participation from the women of TAP.

Some years back, Bellino remembers a girl coming up to them after a skit performance. "She said, 'What I just performed was my own life.' Her boyfriend was severely abusive." After helping this girl get a restraining order, they found automatic weapons and a bulletproof vest in the boy's possession. "He showed all the signs that he could have killed her and possibly others, too." In the last six years, 32 teenage girls in Texas alone were killed by their intimate partners. In 2014, TAP closed 118 cases for clients 19 years of age and under, with the majority of those clients between 14 and 16.

Earlier this month, TCFV worked with Rep. Dawnna Dukes to file HB 1142. The bill would amend Section 37.0831 to require the establishment of a "work group" comprised of domestic violence advocates, teachers, coaches, school nurses, and counselors to "examine the implementation of dating violence awareness and education in public schools." The law would also target middle school programs, because, according to Terry, Bellino, and Blackman, waiting until high school is waiting too long. "By preventing violence at an earlier age we are shaping young adults into productive assets to society who have healthy relationships," says TAP Legal Director Bronwyn Blake. Unfortunately, adolescents who live through violent, unhealthy relationships are at a higher risk for destructive behavior as they get older, including substance abuse, eating disorders, and further domestic violence. Reaching kids earlier means potentially stopping violence before it has a chance to start.

"As a mother of a 14-year-old girl I see how easy it could be for someone to take advantage of her," says Terry. "We have to teach kids what healthy relationships look like across the board."

"We're not just talking about dating relationships, but healthy friendships," emphasizes Bellino. "A lot of times kids are going to be the first responders when they see their friends in unhealthy relationships – they have to know the signs. It's our job to make sure they know those."

Find out more about efforts to combat teen domestic violence on legal, educational, and personal levels at www.tcfv.org and www.texasadvocacyproject.org. 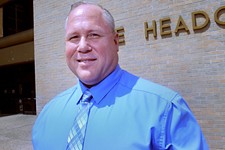