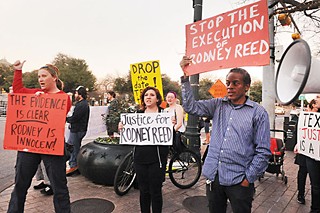 Protesters call for Reed's exoneration at a January rally. (Photo by John Anderson)

The effort to bring justice to death row inmate Rodney Reed continues. Attorneys filed a brief in Bastrop County Court last Thursday, Feb. 12 that argues that the official timeline of the murder of Stacey Stites is inaccurate, and that the discrepancy should be enough to warrant a retrial.

The filing comes on the heels of affidavits from forensic pathologists Dr. LeRoy Rid­dick (who has now written four opinions on the murder since 2003), former Chief Med­ical Examiner of the City of New York Dr. Michael Baden, and Dr. Werner Spitz, whose textbook Medicolegal Investigation of Death is recognized as "the bible of forensic pathology." All three find four inconsistencies:

• The standard pattern of rigor mortis (the stiffening of the body after death) reflects that Stites died well before 3:30am on April 23, 1996;

• The lividity (red discoloration due to pooling of blood after death) found on Stites's face, shoulder, and arm indicates that she was dead and in a different position from that in which she was found for at least four to five hours (enough time for the blood in those areas to pool);

• The three intact spermatozoa found on CSI autopsy smears taken that afternoon were not sufficient to prove Stites had been sexually assaulted between 3 and 5am; 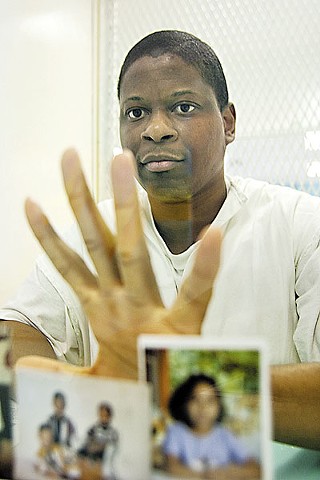 Baden's affidavit adds additional insight into the fluid found in the truck believed to be used to dump the victim's body.

Reed's attorney Bryce Benjet also submitted two affidavits from co-workers of Stites at H-E-B. One, from Lee Roy Ybarra, recalls seeing warm, flirtatious interactions between Reed and Stites, and says that Stites would become "a nervous wreck" who would "deliberately hide" when her fiancé, Giddings police officer Jimmy Fen­nell, Jr., would come by the grocery store. The other, from Alicia Slater (formerly Griesemer) – recounts a conversation with Stites in which she confided not being excited about marrying Fennell because "she was sleeping with a black guy named Rodney and ... didn't know what her fiancé would do if he found out." (Testimony given in 2005 by Dallas police officer Mary Black­well indicated that she had heard Fennell bragging during a police training class that he'd strangle his girlfriend if he found out she'd been cheating on him.)

The implications of Slater and Ybarra's testimonies pale in comparison to those offered by Rid­dick, Baden, and Spitz, however. Accord­ing to their reviews of autopsy reports and photos, crime scene photos and video, and other assorted reports on the site alongside County Road 1441 where Stites's body was found, the three independently concluded that enough inconsistencies exist to debunk the belief that Stites died the morning of April 23. Instead, as Spitz specifies: "all findings point to a post-mortem interval of about 20-24 hours prior to the time the body was filmed" (shortly after 5pm).

Acceptance of Riddick and Spitz's opinions would refute the story told by Fennell, who testified during trial that he and Stites retired to their apartment at roughly 8:30pm on April 22 and that the two were asleep until Stites left for work at 3am. Rather, Benjet says, their findings would support the theory that Stites "was killed at home" and "left in a position in some other location other than the dump site for four to six hours."

Benjet admitted to having overlooked the possibility that Stites's death could have occurred before the accepted time of 3am because he was influenced by Bastrop resident Martha Barnett's testimony (ultimately ruled not credible) that she saw Fennell and Stites arguing in the parking lot of the Old Frontier bar and grill around 5am the morning of Stites's death. Benjet said he was working on last November's ultimately unsuccessful appeal to introduce DNA testing on the belt used to strangle Stites when he received a call from Kevin Gannon – a retired NYPD detective looking into Reed's case for A&E's Dead Again – who suggested Stites may have been killed before midnight when she was still in her apartment. Benjet passed the information along to Dr. Riddick, who agreed with the hypothesis. "We'd missed it," said Benjet. "The state based their whole theory of the case on the police telling them that [3am] was when she left for work and would have been abducted."

Benjet filed this new appeal in Bastrop Dis­trict Court, though the case will be immediately forwarded to the Texas Court of Criminal Appeals, which will determine if a hearing is warranted. The appeal comes on the same day that Reed's attorneys submit an appeal for clemency. Rodney Reed is currently scheduled to be executed on March 5.