The Hightower Report: Amazing – An insurance executive who makes sense!

Here's something I never expected to see: a CEO of an insurance giant who has an actual heart, some common sense, ethics, and the guts to go against corporate orthodoxy. Someone call Ripley's Believe It or Not!

Mark Bertolini, chief of Aetna, is boosting the pay of the insurance company's lowest-paid workers to $16 an hour. Beginning in April, some 6,000 Aetna employees – mostly working in customer-service and billing jobs – will find a boost of up to one-third in their paychecks. But wait, there's more! Aetna is also adjusting its company health plan so about 7,000 lower-income workers can get the same health coverage they now have, but pay some $4,000 a year less for it. Can you believe it? A health insurance break from an insurance company!

Like me, you're probably looking for the loophole in this deal. But, lo and behold, it seems to be on the up and up. Bertolini cast it as a commonsense business move, ­noting that fairer pay lifts morale, attracts more top-notch employees, and helps reduce the $120 million a year in costs that Aetna now shells out because of high employee turnover. While the corporation will gain all of that, there's a deeper element of egalitarian idealism in Bertolini's moves.

"It's about the whole social compact," says this rare CEO, who has also asked all Aetna executives to read Thomas Piketty's landmark book on the escalating price our society is paying for today's ever-widening economic inequality.

The most amazing thing about Bertolini's decision to invest in workers and instill even a smidgen of democratic ethics in a corporate structure – is that it's considered amazing. After all, basic fairness is a core value that we're taught from the time we're toddlers. As Aetna's chief puts it to the CEO class, "Why can't private industry step forward ... to do this?" 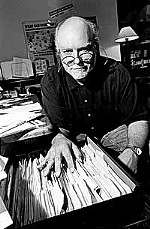