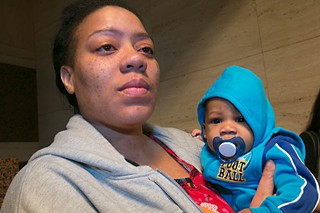 Last Thursday, Feb. 5, marked the third quarterly meeting of the Texas Commis­sion on Jail Standards attended by reproductive rights advocacy group Mama Sana/Vibrant Woman – each time with the purpose of calling attention to the plight of pregnant inmates. Because little has changed since the TCJS meeting in Nov­em­ber (see "Jailed Before Birth," Nov. 14), much of what was said last week was similar to arguments made before. One striking difference, however, was the number of people who came out to the 9am meeting simply to show their support for Mama Sana's campaign. Wearing orange stickers reading "Texas Jail Commission: All Preg­nant Women Have the Right to Quality Care!!," observers crowded into the room at the William P. Clements building, which was standing room only by the time public testimony began.

Mama Sana's Paula X. Rojas once again expressed hope that TCJS would implement some of the recommendations the group has made to them, including making sure that each jail is provided with a list of "specialized maternal care providers" who have expressed a willingness to work with pregnant inmates. Rojas said she had spoken with several providers who were eager to offer their services. Certified Professional Midwife Joycelyn Romero, who works at the Natural Birthing Center in Salado, Texas, later confirmed Rojas' assertion. In an email to the Chronicle, Romero wrote, "All women deserve to be supported and loved through their childbirth experience. From prenatal to postpartum these women should be loved, nurtured, and educated with respect." She said that she would be willing to travel if necessary: "If [a jail] is located 50 miles away, then I drive 50 miles ... They can't come to me."

Rojas said that Mama Sana is "interested in collaborating in any way we can with the commission, but that if more than 180 days pass, we will consider the advice given by Amnesty International USA that an independent oversight mechanism be established," i.e., Mama Sana would ask an independent auditor to evaluate TCJS's enforcement of jail standards.

Tyan Parker Dominguez, a clinical associate professor at the University of Southern California, told the commission that jails should expect that the pregnant women in their custody will have complications. As she explained to the Chronicle, "pregnancy is in and of itself stressful," and that is then compounded by the stress of being in jail and separated from any support system a woman might have. Stress can cause premature labor, among other complications. Not only that, but low-income women and women of color are both "at increased risk for poor birth outcomes," and more likely to be arrested. "The factors make it nonsensical not to do anything about it," she argued. She said TCJS needs "a group of advisors that can help them figure out a good policy that respects the justice paradigm but that can help to inform people what is necessary to maintain the physical health of the people that are in the jails' care."

Although TCJS has yet to implement any of Mama Sana's recommendations, the issue has caught the attention of freshman state Rep. Celia Israel, D-Austin. The day before the TCJS meeting, Israel filed two bills that would require jails to collect data about the care pregnant inmates receive (see "Bill of the Week," p.20). Texas jails are required by law to provide adequate "medical and mental health care, including nutritional requirements, and any special housing or work assignment needs for pregnant inmates." But how well that law has been implemented, since being passed in 2009, is unclear. Israel's bills aim to shed light on that, as well as on the practice of shackling pregnant women, which was restricted by another 2009 law. In her testimony, Mama Sana member Kellee Cole­man pointed out that a study would help direct funding to jails that may not currently have the resources to implement the required standards.

Shela Williams, who was present at both last week's and November's meetings, has spoken repeatedly about her experience in Travis County Jail, which ended in her son Israel's stillbirth last year. She presented TCJS at the meeting with a written complaint about her treatment, and later told the Chronicle that she is looking for a lawyer who can help her file a formal, written complaint with the Travis County Sheriff's Office. Williams, who had received prenatal care from Coleman before she was incarcerated, has not found it easy to navigate the complaint process, but, as an Austin resident who is no longer in jail, she at least has had the advantage of being able to attend the TCJS meetings. Because Williams has been the lone representative of pregnant inmates, it can appear as though hers is the only complaint.

That is not the case. Diana Claitor, executive director of the Texas Jail Project and a longtime advocate for better standards, told the Chronicle that TJP has received several complaints from families of pregnant inmates. While many of these women don't want to make their stories public, LaVandra Rushing, who is currently serving a sentence at the Dallas County Jail and who gave birth to a daughter late last year while in custody, has been open about her experience – as much as she can be while confined to a jail cell. Her mother, Sandra Rushing, contacted TJP in September after becoming convinced that LaVandra wasn't receiving adequate nutrition and medical attention during her pregnancy.

The Rushings' experience illustrates just how difficult it can be for an inmate and her family to call attention to concerns about standards of care. After TJP made a complaint with TCJS on behalf of LaVandra, they received a letter from the commission, dated Oct. 10, 2014. "No violation of jail standards has occurred," the letter declared. "HIPAA rules will not allow me to share confidential medical details with you or any other family member. What I can inform you is that [inmate] Rushing is receiving adequate medical attention." The letter went on to say that, according to the doctor treating LaVandra, "Sandra Rushing is satisfied with the course of treatment [inmate] Rushing is receiving."

It's a curious statement, in light of Sandra's repeated efforts to get better care for her daughter and unborn granddaughter. While Sandra has given both TJP and the Chronicle as much information about her daughter as she can, HIPAA laws and jail bureaucracy have kept her from acquiring LaVandra's medical records – the only written documentation of whatever care LaVandra received – although she told the Chronicle in an interview this week, that she hopes to get copies soon. She and LaVandra continue to have complaints – LaVandra, during an interview conducted at the Dallas County Jail last December, said that, due to a lack of clean linens and underwear, she was having trouble caring for her episiotomy wound. LaVandra said that her public defender has been sympathetic to her situation, but the process of trying to get her sentence reduced in light of the circumstances has moved slowly.

Sandra, who both works full time and cares for LaVandra's children, does what she can for her daughter. But without the money to hire a private attorney or the time to travel to Austin, the Rushings' complaints may go without further investigation. The women hope that doesn't happen. "I don't want anybody else to have to go through this," LaVandra said.