In the current episode of Laura Pressley's increasingly permanent campaign for City Council, Judge Daniel H. Mills of the 424th District Court (Blanco County) has been appointed to preside in the 201st District Court (Travis County) over the election contest filed by Pressley against District 4 Council Member Greg Casar, who defeated Pressley in the Dec. 16 run-off. Pressley has claimed "discrepancies" in the vote count sufficient to overturn the results – she lost the run-off 65-35%, or by 1,291 votes – although a Jan. 6 recount requested by Pressley precisely confirmed those results, and her several complaints to the secretary of state that the recount had been incorrectly managed by Travis County Clerk Dana DeBeauvoir were also dismissed.

The election contest – the last avenue open to a candidate who refuses to accept defeat – is technically filed against the winner ("Contestee"), although Pressley's petition argues that the election itself was inadequate or illegal because two large-population polling places were closed for the run-off (when polls were consolidated), and that since the current electronic voting system does not enable literal "images of ballots cast" to be printed and counted by hand, the election "result cannot be known, and the Court must order a new election." In an interview, Pressley insisted to the Chronicle that the contest is "not about Casar" ("He did nothing wrong," she said) – nor even about the work of County Clerk DeBeauvoir – but instead an earnest attempt to make certain that the election system is fair, transparent, and accurate. She says early voter rolls* suggest that some mailed votes may have been counted twice – although those paper ballots were duly recounted by hand on Jan. 6 – and that some other voter records* possibly reflect more votes than voters. In all, her petition identifies 121 possibly uncounted or miscounted votes. If that were true, and every single miscounted vote were in her favor, she would still trail Casar by more than 1,100 votes. However, she continues to insist that only "ballot images" – not the "cast vote records" permitted under state law – could resolve these "discrepancies" and anomalies.

Although a judge has now been assigned, Casar was not formally served with the contest papers until late Tuesday. Attorney Chuck Herring, representing Casar, says he expects to provide a response for his client within the designated 10 days. But Herring pointed out that Casar had no control over election procedures and is not in a position to answer most of Pressley's charges. "Most of the burden will fall on the county clerk and the county attorney," Herring said. Through her attorney, David Rogers, Pressley has requested voluminous discovery from the clerk, including virtually all available voting records of any kind, and even the names of any persons who may have worked on electronic voting machines in the 2013 and 2014 elections – indeed, much of the petition appears to be an attempt to contest any and all Travis County elections using electronic voting equipment. 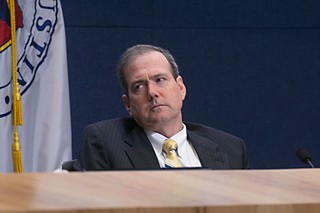 Pressley told the Chronicle, "The numbers don't add up ... there are discrepancies that have to be resolved." Meanwhile, she is maintaining her campaign fundraising account and is soliciting donations, ostensibly to retire her campaign debt – and to help "ensure our elections are fair, transparent, and accurate."

Zimmerman told the Austin American-Statesman that his wife had left her job to work on the campaign full time, and that he didn't believe "personal services" includes campaign work. "Everybody we paid was working on a campaign – no personal services," he told the Statesman, displaying a Clinton-esque linguistic sensibility. "I felt embarrassed to only give her $2,000."

On Thursday, Feb. 5, local attorney and former Travis County judge Bill Aleshire, who has represented the Bulldog (although not in this matter), filed a complaint with the Travis County Attorney's office about the payment. "It is difficult to believe that [Zimmerman] was not aware of this clear, longstanding prohibition against payment of campaign funds to himself or his wife for personal services to the campaign," it reads.

Aleshire provided the Chronicle with a copy of the complaint, along with a scathingly pointed email addressed to Stephen Casey, Zimmerman's campaign treasurer and the attorney who represented him in his failed defamation lawsuit against the Bulldog. (Rogers, Laura Pressley's current attorney, was Casey's co-counsel in that suit; see "New CM Zimmerman Loses to Bulldog," Jan. 9.) "You're probably wondering why I filed this complaint instead of waiting to see if someone else would file it," Aleshire wrote to Casey. "The reason is not political, particularly considering that I often agree with Mr. Zimmerman on issues of wasteful spending of tax dollars. The reason I filed it is my observation of how threatening Mr. Zimmerman gets to people who report on or criticize him publicly. His reputation might scare off some critics, but if he is going to try to bully someone this time, he'll have to try to bully me."

While Zimmerman's office declined our request for comment on the complaint (calls to Casey's office were unreturned), the Council member did give a statement to the Austin Monitor. "This used not to be against the law," he was quoted as saying. He went on to explain to the Monitor that, according to his attorneys, "the law may have changed in 2007. The laws are constantly changing." Aleshire, ever attentive, sent another email to Casey reading, "I saw where your client, Mr. Zimmerman, claimed that his attorney told him that [statute] was amended in 2007, suggesting that the prohibition against a candidate paying the candidate or the spouse for working in the campaign was a new thing. Based on my quick look at the statutory history, the best I can see, that prohibition has been in the election code since at least January 1, 1992."