Professor Dumpster Moves Out ... And On

He's leaving the Dumpster to a new, rotating cast of residents 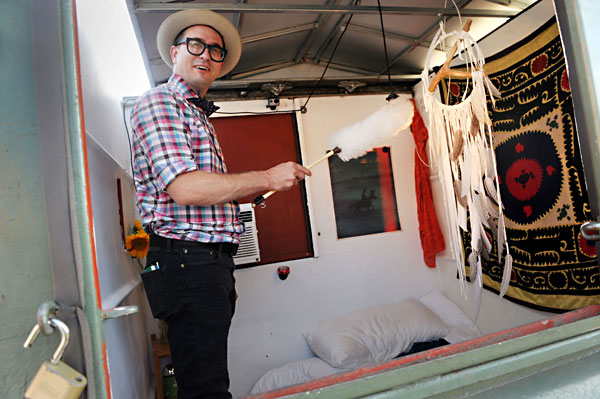 Professor Dumpster in his element (Photo by John Anderson)

Has it really been a year already? Apparently so, says Huston-Tillotson University College Dean Jeff Wilson, who on Tuesday night concluded his year-in-residence in Austin's most esteemed trash can. During the depths of last winter's cold spell, the biology professor moved into a Dumpster on the west side of HT's campus with little more than a sleeping bag and an iPhone for comfort. As an experiment in "less is more" living, the Dumpster Project was intended to test the limits of both sustainable design and sanity. In regard to the latter, says Wilson, "I'm way happier than before I moved into the Dumpster."

It turns out that a 6-by-6-foot metal box makes an adequate cave for reading, napping, or getting away from it all. At the same time, says Wilson, "you're just kind of forced to engage more, and I think that's a big part of why I'm happier." He notes that the low rent and "minute-and-a-half" commute to the office don't hurt either.

"We didn't make it to that sort of uber-Dumpster that we wanted," says Wilson. "One of the lessons learned is that it's pretty damn hard to renovate your house when you're living in it." A composting toilet, pop-up balcony, and other experimental design elements went unrealized. Still, the project team planted gardens, installed data monitoring equipment, and got an air-conditioning unit (more important than a bathroom, discovered Wilson). Other additions are forthcoming as part of student-driven Brainstorm for the Box design challenges.

Wilson gave the Dumpster a fresh coat of paint last week in anticipation of its next guest, Blackshear Elementary School Principal Betty Jenkins, who planned to stay overnight Wednesday to kick off the Dump­ster Project "Home" School residency program. Other resident teachers will follow (students­ can nominate a teacher at www.dumpsterproject.org/homeschool). All will return to the classroom with a Dumpster 101 curriculum developed in partnership with EcoRise and Blackshear, and piloted by the roughly 1,000 K-12 students who visited the Dumpster over the last year.

Wilson, meanwhile, is postponing a return to normalcy. Instead, he'll be spending 99 nights in different homes around town (e.g., mansion, high-rise condo, nursing home, under a bridge), all documented and photographed by his partner, writer Clara Benson, and photographer Sarah Natsumi Moore. "There's such a real housing crisis in Austin," says Wilson. "This doesn't go directly to the heart of that, but it sort of dances around it a bit." He hopes to explore the meaning of home and to "gather a little bit of data" along the way. "It would've been a pretty big culture shock to move back into a real house," he says. "I've got to kind of transition."

Visit www.99nightsatx.com to follow Wilson's couch-surfing journey or to nominate a home where he should stay.

Who's Responsible for Financial Aid Woes at H-T?
Students frustrated by delayed aid