In Texas, it can be hard to keep track of every assault on reproductive freedom. While the constitutionality of HB 2, the notorious anti-abortion bill, continues to be litigated, women without the means to travel to one of Texas' few remaining abortion clinics are effectively denied their right to an abortion. However, the focus on abortion rights can sometimes obscure the fact that "pro-choice" should also support a woman's right to give birth.

Kellee Coleman and Paula X. Rojas, members of Mamas of Color Rising and Mama Sana/Vibrant Woman, have been working for years to "improv[e] pregnancy and birth outcomes for communities of color in Austin." Over the past year, they've focused their efforts on calling attention to the lack of adequate care for pregnant inmates in Texas jails. Last November, as the Chronicle previously reported, members of Mama Sana and the Texas Jail Project testified at the Texas Commission on Jail Standards' quarterly meeting about their concerns and suggestions for improvement (see "Jailed Before Birth," Nov. 14).

The stories of women such as Shela Wil­liams, who attended the November hearing, convinced Mama Sana and TJP that standards of care aren't being upheld in jails. In August 2014, while serving a sentence in the Travis County Jail, Williams gave birth to a son, Israel, who had died in utero. Williams and Coleman, who had been assisting Williams with prenatal care before she was arrested, think that more could have been done to prevent Israel's death. They disagree with the Travis County Sher­iff's Office, which has said Williams and her unborn child did receive adequate care.

Some of the problem in these cases appears to be a lack of transparency and oversight. TCSO can't detail why they believe Williams received proper medical care, according to spokesperson Roger Wade, because it would violate her privacy under HIPAA. But Williams says she hasn't received an explanation for some of the decisions she most strenuously opposed, such as a reversal of permission to attend Israel's funeral, despite her repeated efforts to get more information. "I wanted to see whoever it was and tell me why they denied me and tell my 6-year-old son why his mother wasn't at his brother's funeral," says Wil­liams. For his part, Wade says that in order for TCSO to investigate, Williams would need to make her complaint in writing rather than verbally, as she has in the past.

A potential source of information about the frequency of cases such as Williams' would appear to be the Texas Attorney General's list of custodial death reports, which is published online. Yet it turns out that the official position is that stillbirths are not to be counted as deaths in custody, because the interpretation of the reporting requirement is that it's not the fetus who is in custody, and therefore, stillbirths aren't technically custodial deaths. A representative from the Galveston County Sheriff's Department, which has three deaths of unborn children (the most recent occurred in 2011) on the AG's list, says they had been reporting stillbirths in their jail, but stopped after receiving that clarification. Wade says the only record TCSO would have of miscarriages and stillbirths would be in inmates' medical files, which, of course, cannot be made public.

Both the sheriff's office and TCJS say that they follow the AG's interpretation of the custodial death reporting requirement. However, it's unclear where the definition of "custodial death" actually originated. Lauri Saathoff, a representative for the AG's office, says it's up to the individual law enforcement agencies to decide how to interpret the reporting requirement; the AG's office simply compiles the reports it receives.

Women like Williams want an explanation of why they were treated a certain way, but they also believe "no other pregnant woman should ever experience anything like that ever," says Williams. Mama Sana had given TCJS a list of recommendations to improve care and enforcement of existing standards last November, but they have yet to see any of them implemented.

Brandon Wood, executive director of TCJS, says there are some recommendations that he believes can be put into effect. Mama Sana provided TCJS with a list of certified "specialized maternal care providers" throughout the state in an effort to make sure jail administrators were aware that proper care is available, and Wood says that TCJS will likely send out a technical advisory memo with the list to the nearly 300 jails the TCJS oversees. The commission is also exploring the possibility of a FAQ page on its website that would detail resources for pregnant inmates.

It's understandable that TCJS is moving slowly on the issue, says Diana Claitor, executive director of the Texas Jail Project, which has fought for better jail standards since 2006. The commission tends to work very slowly, and it has a lot of stakeholders to consider. "Before a change in standards is ever going to happen, they have to see a reason [for the change]," she explains. TCJS has a small staff and budget, which further slows its ability to act. According to Claitor, TCJS has only four inspectors, doesn't investigate all complaints, and relies on the individual sheriffs' offices to help them determine which complaints are valid.

But this slowness is a real problem for pregnant inmates and their families, who are "operating under a deadline," as Claitor puts it. "They're trying to prevent their baby from being damaged." What's more, "most of the time I find they are not exaggerating about the bad medical care," says Claitor of the families that come to TJP for help. Claitor is encouraged, though, by the fact that a couple of bills are currently being drafted by Texas state reps that deal with pregnant inmates.

Coleman finds it ironic that the same lawmakers that are against abortion aren't more inclined to protect women who want to have their children. Mama Sana is hopeful that by calling attention to the problem and asking people to attend the upcoming Feb. 5 TCJS meeting and show their support for pregnant women, things will change. After all, asks Coleman, "what's the point of having a commission if they're not going to enforce the standards they create?"

The Texas Commission on Jail Standards meets Thursday, Feb. 5, 9am, at the William P. Clements Building, 300 W. 15th, Rm. 103. See the list of Mama Sana’s recommendations to TCJS at www.mamasanaclinic.wordpress.com. 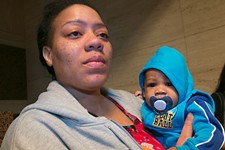 Right to Birth
Pressure on state for better pregnancy care