Council: Between the Cup and the Lip

The 10-1 Council takes its first agenda 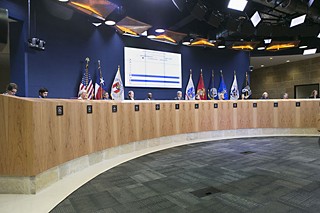 The new City Council takes the first test of its governance reinvention today (Thursday, Jan. 29) – the first formal, regular meeting of the 10-1 Council – and judging from the available evidence, it's going to take some doing to fulfill the members' first promise: shorter and more efficient meetings. Tuesday's work session took a run at most of the major (and not a few of the minor) Items on today's relatively manageable agenda (53 Items in all), and after nearly six hours, there was still plenty of gristle to chew.

Here's just some of today's business at hand:

• Item 26: Consideration and adoption of the revised meeting and committee structure – at Tuesday's last accounting, there were 10 standing committees, but amendments were flying and a host of ancillary questions remained (e.g., committee meeting scheduling, especially as they intend to hold public hearings).

• Items 22 and 23: Creating an external, intergovernmental committee on "Regional Affordability" and a "Task Force on Com­munity Engagement" – neither apparently controversial in conception, but details very much to come.

• Item 25: The proposal by Mayor Steve Adler and District 1 CM Ora Houston to allow Council members to adjust their staff salaries within the overall office budget limit (basically, to "give back" their own salaries to other needs). This turns out to be a formal budget adjustment (requiring an ordinance) and also raises questions about precedent and policy vs. CMs' personal choices: Who decides?

• There are 21 zoning cases of various import, including the long contentious Garza Ranch Tract (Items 38 and 39). Usually Council can plow through that many cases inside of an hour, but this fledgling group is green as grass and shows signs of questioning every detail – practically and ideologically.

• There are four public hearings, all with "time certains" (that is, can't begin before) of 4pm. All four (Items 50 through 53) could prove contentious – involving ordinances on redevelopment, secondary dwellings, Down­town residential regs ... (you get the picture). Any or all of these could test new Council's commitment to early adjournments.

• Long before they get to all that, District 6 CM Don Zimmerman, who has already expressed his annoyance with city staff proceeding with ongoing city business without his prior approval, declared he would be pulling a dozen consent Items involving city contracts (about $75 million in all) to determine whether they're necessary and timely. He received some of his answers at the work session Tuesday – today we'll find out whether he's satisfied. He has also expressed great skepticism on zoning matters – suggesting that property rights should trump all – so Council may wander into the weeds on zoning as well.

Take some comfort: It's National Wear Red Day, National Stalking Awareness Month, and the musical honorees are the very persuasive Dead Things Don't Bleed. May the rest of us be so lucky.