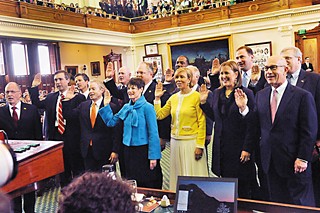 No formal City Council meeting this week, though the new 10-1 crew has been having orientation sessions with city staff at the Downtown Hilton, and planning structural changes to Council business, to be discussed in a public hearing Jan. 22, then considered on Jan. 29. See Public Notice, and "Council: Hilton Honeymoon."

The annual community march and rally honoring the life of Martin Luther King Jr. will begin 9am Monday at UT-Austin's East Mall and proceed to the Huston-Tillotson Univ. campus where events and entertainment continue until 3pm. Participants are asked to bring canned goods or nonperishable items for donation at UT or H-T.

Travis County Commissioners Court asked for a delay this week in an agreement between the Barton Springs/Edwards Aquifer Conservation District and the Texas Dept. of Transportation concerning planned construction of SH 45 SW, which opponents called an attempt to evade environmental standards for the project, although the parties say it's an attempt to enhance standards in a 1990 agreement.

The Court of Criminal Appeals this week rejected the appeal of Milton Gobert, sentenced to death for the 2003 murder in Austin of Mel Cotton and the attempted murder of her 5-year-old son. Gobert has federal appeals pending.

Rashad Owens posted in court on Thursday, though very little happened. Judge Cliff Brown noted that he'd like to hear Owens' case in 2015. Owens, 22, has been in custody since March, charged with capital murder, murder, and aggravated assault for the incident that killed four last SXSW.

The 84th Session of the Texas Legislature began with a lengthy speech by Secretary of State Nandita Berry that got Twitter giggling with constant references to fast food joints around the state. Now the laughter stops, as serious business begins (see "Unsettled Business," Jan. 16).

Open carry advocates shot themselves in the foot after video was released of a group making statements interpreted as veiled threats to Rep. Poncho Nevárez, D-Eagle Pass, and calling him a "tyrant." Gun rights organization Open Carry Texas quickly distanced itself from their actions.

With cupcake in hand, the state's new Agricultural Commissioner, Sid Miller, reminded Texas parents the rules restricting sugary snacks in classrooms have been lifted. "[T]he government here in Texas is getting out of your lives." Too bad Miller didn't apply the same restraint toward women's bodies – as a state senator in 2011, he authored the state's pre-abortion sonogram law, one of the most intrusive anti-choice bills in the country.