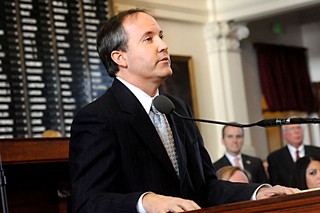 The 84th Legislature was supposed to be the session where Texas politicians took on the thorny issue of school finance. Now the heavy lifting may be delayed two years, as all parties in the ongoing litigation on the issue asked for a massive extension on the timeline.

The case in question is the state's appeal of Judge John Dietz's 2014 ruling, which held the current school finance system unconstitutional. The state filed its appeal in the Texas Supreme Court back in August, but on Jan. 6, Attorney General Ken Paxton filed a request to change the timeline.

Normally, a case like this would have three significant landmark dates, beginning when the court notes that it has jurisdiction. First, the appellants (in this case, Commissioner of Education Michael Williams, Comptroller Glenn Hegar, the State Board of Educa­tion, and the Texas Education Agency) would have 30 days to file their briefs, and then the appellees (the Texas Taxpayer and Student Fairness Coalition, et al.) would have 30 days to file their responses. After that, there's an extra 20 days, during which both parties can respond to whatever the other filed.

However, due to the massive complexity of this appeal, all parties are asking the Texas Supremes for a huge extension: 80 days for appellants, 80 for appellees, and 40 for responses. That takes the process from 80 days to 200, and that's before the first day in court. This is not necessarily a stalling tactic: As the state notes in its filing, this is "unusually complex," even for a school finance case. There are multiple plaintiffs, not all of whom are in agreement, and the sheer amount of material to wade through is monumental: Dietz's ruling and supporting explanation alone comprise the 364-page tip of a 230,000-page, 309-volume reporter's record.

That new timeline, if accepted by the court, means the Supremes are unlikely to make a ruling until 2016, five years after the original lawsuit was filed. The plan has always been that the state's appeal would be dealt with by the courts, then lawmakers could respond and reform accordingly. The hope among many was that the issue could be handled, if not during the 84th regular session, then in special sessions across the fall and winter of 2015. Instead, this risks becoming a 2017 agenda item, and that's frustrating for lawmakers desperate to get the ball rolling now.

House Appropriations Committee Mem­ber Dawnna Dukes, D-Austin, said, "To drag it out like that is a disservice." Dukes put the blame squarely on Governor-elect Greg Abbott, who filed the original appeal when he was still attorney general. Her concern now is twofold: First, that the system itself will remain unchanged for two more years, and second, that conservatives will delay any extra education investment this year, including proposals for pre-K finance. Rather than deferring education costs again, she said, "This should be the number one priority."