Sanctioned for lawsuit against publication 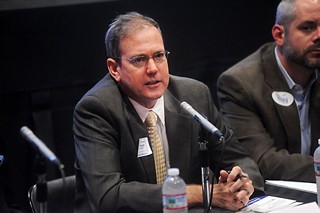 On Wednesday, Jan. 7, Judge Amy Clark Meachum granted the motion to dismiss newly inaugurated District 6 Council Member Don Zimmerman's lawsuit against the Austin Bulldog. As the Chronicle has previously reported ["Zimmerman's Latest Lawsuit," Dec. 12, and "Zimmerman Suit Not Yet 'Bygone,'" Dec. 26], Zimmerman sued publisher Ken Martin and his online newsletter for defamation, after the Bulldog published an article in October reporting how the candidate had lost custody of his teenage daughter. Although Zimmerman tried to drop the suit after winning his election, Martin asked that the court consider his previously filed motion to dismiss instead. Meachum agreed with Martin's claim that Zimmerman's original suit was a SLAPP suit ("strategic lawsuit against public participation"), and ordered the council member to pay Martin attorney's fees as well as sanctions, as required by Texas law.

In oral arguments Monday, Jan. 5, and in their written response to the motion, Zimmerman's lawyers seemingly abandoned some of the defamation claims they'd made in their original suit, and instead focused on one claim – that Martin's article was defamatory because it "falsely stated that a medical doctor had expressly concluded Zimmerman abused his estranged daughter. ... [By reporting] that the doctor reports literally state that Mr. Zimmerman 'on separate occasions' 'inflicted bruises, pulled Marina's hair, pushed her, and "threatened to kill her."'"

The doctor's reports do read, "Her dad has been yelling at her and threatened to kill her but didn't. He has threatened to kill her and she has fears of shooting her," making it difficult to understand why repeating the reports would be defamatory. Zimmerman's lawyers, Stephen Casey and David Rogers, argued that the Bulldog made the reports sound as though the doctor had "confirmed abuse when it was actually hearsay," i.e., the doctor had no way of knowing how Zimmerman's daughter had come by her injuries, and was simply repeating the explanation given to her by her patient.

The Bulldog's lawyer, Peter Kennedy, disputed this characterization, writing in his reply that "no reasonable reader could think that the reports were Dr. Neitsch's personal observations of abuse, rather than her examinations [of her patient]." He argued in court that there was "no way" that Zimmerman could prove that the Bulldog's article has been more harmful to his reputation than the court documents themselves. He said on Monday that Zimmerman's suit is "a clear example of what the Legislature was trying to prevent when it passed the TCPA [Texas Citizens Participation Act]." Zimmerman is "using this court to intimidate a small media entity."

Meachum denied Zimmerman's request for limited discovery in order to "demonstrate malice," by searching Martin's computer for the names mentioned in the story. In court on Monday, Casey said that the discovery was necessary to determine Martin's reasons for publishing the article. Kennedy responded that in a defamation case, actual malice is "a term of art," and applies only to whether a defendant knew or had a high level of suspicion that what the defendant published was false; since Zimmerman hadn't proven that Martin's article was substantially false, no amount of discovery would prove malice.

Zimmerman's lawyers alleged that it's Martin, the Bulldog, and his attorneys who are responsible for the progression of the lawsuit. After Zimmerman filed the lawsuit, he didn't serve Martin, because he was "spending his time deeply involved in his goal of representing the citizens of Austin, District 6. ... Defendants, eager to engage in a high publicity court battle to accomplish their political goals against Zimmerman and their crass business goals of increasing their advertising rates based on increased viewers, filed an answer and motion to dismiss on their own volition prior ever to being served with process." (In fact, the Bulldog is a nonprofit entity and does not sell advertising.)

Because the Bulldog chose to answer the suit before being served, Zimmerman's attorney argued, the attorney's fees incurred (about $22,000) are unreasonable. Kennedy took issue with this argument, writing, "Zimmerman's gamesmanship in not immediately serving the defendants with citation is irrelevant. The Austin Bulldog and Ken Martin have the right to vigorously contest meritless accusations of libel. They did not have to wait on Zimmerman's timetable before filing a Chapter 27 motion seeking a dismissal with prejudice."

A version of this article appeared in print on January 9, 2015 with the headline: Judge Rules for Bulldog