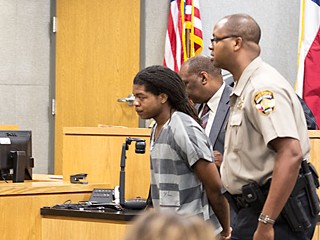 1) TRAGEDY ON RED RIVER Rashad Owens' DWI-crash into a crowd of festival­goers on Red River Street, killing four, may have changed the way South by Southwest operates forever.

2) TURKEY TROT TERRORIST "High Priest of the Phineas Priesthood" (i.e., white supremacist) Steve McQuilliams' rampage through Downtown shortly after 2am the night of Thanksgiving resulted in damage to four buildings – the Mexican Consulate, a federal building, a nearby bank, and APD head­quarters – but no human casualties, until McQuilliams himself was shot and killed by APD Sergeant Adam Johnson from more than 100 yards away.

4) THROUGH THE DIGITAL WINDOW Video visitation at Texas jails spent 2014 under the microscope, as inmate rights' organizations fought back against recent changes to enforce video-only visitation policies at most county facilities. Locally, incoming Travis County Judge Sarah Eckhardt said the issue will move to the top of her "to-do" list when she takes office later this month. 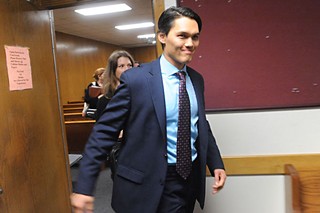 5) DID YOU HEAR THE ONE ABOUT THE COP AND THE RAPE JOKE? APD Officers Mark Lytle and Michael Castillo received five- and three-day suspensions respectively for their roles in cracking the lamest rape joke to ever be caught on a dashboard recording. Lytle's "they can't unrape you" quip pales next to the sexist trash now-former-Officer Andrew Pietrowski spewed to KUT's Joy Diaz – but by now you could say the city's heard that one before.

6) SANE ENOUGH TO DIE? Schizophrenic death row inmate Scott Panetti received a last-minute stay of his execution in early December, after the 5th U.S. Circuit Court of Appeals decided it needed more time to decide if the 56-year-old, convicted of the 1992 murder of his in-laws, is mentally stable enough for the gurney.

7) KLEINERT INDICTED In May, former APD Detective Charles Kleinert learned he'd be indicted for manslaughter after shooting and killing unarmed black Austinite Larry Jack­son Jr. in July 2013. Kleinert pleaded not guilty at a hearing in December and is currently set to stand trial on April 20, 2015.

8) LAWFUL DISOBEDIENCE It was only for a penalty of $500, but local cop-watching activist Antonio Buehler's victory in an October Class C misdemeanor trial (on charges that he disobeyed a lawful order during his infamous NYE 2012 arrest) mattered for reasons more than money – and gives Buehler a leg up in his civil suit – filed against the city, APD, and offending officers, currently scheduled for this spring.

9) PERRY INDICTED Damn near everybody in Texas knew Rick Perry would abuse his gubernatorial power at some point during his 14 years in office. What nobody suspected was that he'd actually get indicted for it – specifically, using his veto threat to try to force the resignation of Travis County District Attorney Rosemary Lehmberg.

10) FIRST AMENDMENT ON FACEBOOK While local teenager Justin Carter awaits trial for making comments on Facebook that were interpreted as threats by the officers who arrested him, Elonis v. United States, another case involving Facebook and free speech, is set to be decided by the Supreme Court later this year.