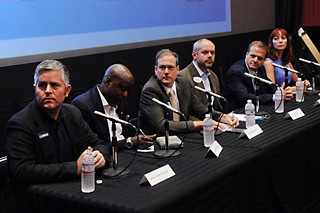 1) 78 CANDIDATES With 10 seats up for grabs (plus mayor), and significantly smaller electorates to woo than in previous Council races, the field crowded quickly with returning contenders, formidable challengers, and, of course, more than a few cranks.

2) ALMANZA VS. RENTERIA VS. EVERYBODY ELSE It's hard to quantify mudslinging, but it certainly felt as though there was more of it in District 3 than anywhere else. Sign-stealing, sibling rivalry, shouting matches, police escorts, racist parody Twitter accounts, ethics violations real and imagined ... if nothing else, D3 was never dull.

3) THE REINVENTION OF LAURA PRESS­LEY The D4 candidate presented herself as a taxpayer advocate, and tried to leave behind her past as an anti-fluoridation 9/11 truther. For a while it worked – she even earned the Statesman's initial endorsement. However, after video of her appearances on InfoWars and a recording of her saying that she believed "something was planted in the [World Trade Center] buildings" resurfaced, the Statesman decided to retract its support.

4) STRIKING FEAR IN THE HEARTS OF LAWYERS Don Zimmerman entered the D6 race with a reputation for litigiousness, and he maintained it throughout. In October, angry that the Austin Bulldog had reported the details of how he lost custody of his daughter, he sued the blog for defamation. The outcome of that case is yet to be determined – there's a hearing Jan. 5. 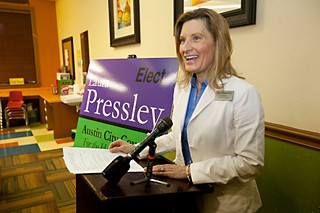 6) ALL THAT MONEY CAN BUY While D10's Robert Thomas came in first among district candidates lending their campaigns money – he ultimately loaned himself $100,000 – he was eliminated when he placed third in the general election. Steve Adler, who broke records both in fundraising and self-loans, fared better.

7) THE PUPPETMASTER? A two-page ad (costing $20,000) placed in the Statesman in early December fingered political consultant David Butts as the "Invisible Man" who has "total control of who runs for office and wins elections." The group behind this ad? The heretofore unknown and still mysterious "Coalition of Austin Neighborhoods" PAC.

8) STILLWELL MAILER MELTDOWN A couple of weeks before the November election, D6 candidate Matt Stillwell released a mailer that listed the marital status and number of children of each of the district's candidates. While Stillwell lost the election, the "family values" tactic made it into the run-off – Texas Values Action sent out a mailer contrasting Zimmerman's anti-gay and anti-choice bona fides with Jimmy Flannigan's pro-LGBT rights and pro-choice stance, while Pressley accused D4 opponent Greg Casar of not only being single, but also an atheist.

9) GOP OPPORTUNITY DISTRICTS A perhaps unintended result of 10-1 was the sudden viability of conservative candidates in West Austin. Republicans Zimmerman and Ellen Troxclair won their districts, as did fiscal conservative Sheri Gallo.

10) CANDIDATES PARACHUTE Patsy Woods Martin and Bill McLellan both dipped their toes in the 10-1 water way back in Jan. 2014, only to abruptly pull them right back out – and instead endorse Steve Adler.