Hopkins wins backpay, and the suspension will be removed from his record Hopkins originally received the eight-day suspension in the wake of his May 2013 arrests of Jason Roche, Melynda Trevino, and Vanessa Price. A review was conducted on the officer's handling of the arrest shortly after his chain of command read the arrest affidavit. After questioning, Hopkins was sustained on two violations: Responsibility to Know and Comply, and Neglect of Duty.

Assistant City Attorney Ann Spiegel argued that the relevant facts in the case are not in dispute. Everybody saw an improper arrest on the dashboard camera footage taken during the arrest; Hopkins' chain of command determined that the officer "failed to satisfactorily perform his duties or to exercise sound judgment or discretion in his handling of this call for service." He should not have arrested Price for interfering with another arrest; the "other arrest" (Jason Roche's), Spiegel argued, shouldn't have happened in the first place. Moreover, the city stated, Hopkins did not comply with post-arrest coaching, a surefire sign that he did not understand protocol.

Hopkins' attorney Nadia Stewart countered by noting that the city's accusations against Hopkins have been "procedurally deficient" from the beginning. In hearing examiner Michael B. McReynolds' words, the suspension notice "does not contain allegations of specific acts of misconduct specifying how [Hopkins] violated any civil service rules." To that effect, said Stewart, Hopkins' chain of command proved inconsistent in their expectations of him. A Performance Improvement Plan levied against the officer required that he "fully investigate all potential crimes," she said, yet part of the allegations imposed upon him found fault in his decision to arrest (and not ignore) Roche for furnishing alcohol to a minor.

McReynolds wrote that Chief Art Ace­ve­do's memorandum announcing Hopkins' mistakes was "more than sufficient to fulfill the notice requirements" but ultimately ruled that it was somewhat of a moot memo. Hopkins was within policy to have arrested Roche, Trevino, and Price, McReynolds decided: "Nothing he did rose to the level of neglect of duty or failure to know and comply."

"It is all too easy to find fault with someone's actions when the person reviewing the action was not present during the matter being reviewed, and that person has the advantage of studying the event at length and at his or her leisure," McReynolds wrote in his decision. "Even coaches of winning athletic teams often seem too willing to be critical of their team's performance when the game is over and flaws in each play can be studied in detail."

Hopkins will receive eight days of backpay as well as having the suspension wiped from his record. That second benefit will surely help him moving forward. At present, the 33-year-old has a number of outstanding federal and civil complaints against the city, as well as an appeal on his termination headed toward a hearing. 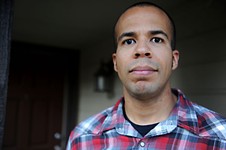 House Arrest
APD brass decided they had a problem with Officer Jermaine Hopkins – so they assigned him to stay-at-home duty until they could figure out what to do with him. That was a really bad idea.