Zimmerman Suit Not Yet "Bygone"

Judge will hear motion that could mean sanctions 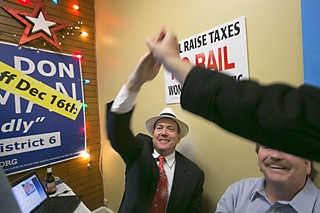 At 9:46pm Tuesday, Dec. 16, as the final City Council election returns were arriving, District 6 Council Member-elect Don Zim­mer­man filed a notice of nonsuit regarding his lawsuit against Ken Martin and his online politics newsletter the Austin Bulldog (see "Zimmerman's Latest Law­suit," Dec. 12). Zimmerman had sued Martin and the Bulldog for defamation after Martin reported details in early October of how the candidate had lost custody of his teenage daughter. In response, the Bulldog's attorney, Peter Kennedy of Graves, Dougherty, Hearon & Moody had filed a motion to dismiss. A hearing took place Thursday, Dec. 18. (Kennedy is also the Chronicle's attorney.)

A successful defamation suit must show – as the Bulldog's motion to dismiss states – "that the defendant published a substantially false and defamatory statement about the plaintiff with actual malice." Zimmer­man seems to have taken offense because, as Martin had reported, he argues that the custody court's findings are false. On election night, Zimmerman was still angry about his custody case becoming public. He told the Chronicle that he had a witness who would testify that the bruises his daughter's doctor interpreted as evidence of abuse were actually from a fencing class. However, it's not clear how disputing the accuracy of the court's findings – which Zimmerman had officially accepted – would help prove defamation on the Bulldog's part, since Martin hewed closely to the publicly available court documents, rather than making claims of his own.

Zimmerman's lawyer, Stephen Casey, instead argued in the lawsuit that Martin got various small details wrong, prompting attorney Bill Aleshire to tell the Austin Monitor that the lawsuit "has the smell of a SLAPP suit." A "strategic lawsuit against public participation" is a lawsuit designed to discourage the exercise of certain First Amendment rights, including free speech. In 2011, the Legislature enacted the Texas Citizens Participation Act, designed to "encourage and safeguard" constitutional rights. Under the TCPA, a defendant hit with a SLAPP suit automatically recovers damages and costs if a judge grants their motion to dismiss.

At last Thursday's hearing on the motion to dismiss, Casey argued that the notice of nonsuit voided the Bulldog's motion to dismiss – how could the court dismiss a case that no longer existed? He said that Zimmerman dropped the suit not to avoid paying Martin damages, but because once he realized he'd won the Council race, he thought, "Bygones. Let's rise above." Ken­nedy strenuously disagreed. According to him, Zimmerman's lawsuit had had its intended chilling effect on the media's First Amendment rights, and now the Council member-elect was trying to avoid the consequences of filing a suit that might result in damages being awarded to the Bulldog. Moreover, the Bulldog had already incurred legal fees just by having to respond to the suit.

Ultimately, Judge Amy Clark Meachum sided with the Bulldog and decided that she does have the authority to hear the motion to dismiss. However, Meachum postponed the hearing to Jan. 5 in response to Casey's argument that he and his co-counsel would need more time to prepare a response to the dismissal motion.

Laura Lee Prather, a lawyer with Haynes & Boone and the lead author of the TCPA, said that the intent of the law is for people to be able to "write and speak about matters of public concern without fear of retribution." Simply dropping a defamation suit "does not repair the chilling effect of the filing of the lawsuit." She pointed to a recent case she had argued in Harris County, Susan Delgado v. Carol Alvarado. In that case, state Rep. Alvarado was sued for defamation by former challenger Delgado. Although Delgado nonsuited after Alvarado filed a motion to dismiss, the judge not only heard the motion, but granted it, awarding Alvarado approximately $11,000 in costs.