Rising From the Halloween Flood

Homes and lives rebuilt one day at a time 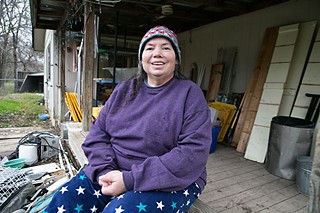 Claudia Patton is repairing her house and life. (Photos by Jana Birchum)

Very early on Halloween morning, 2013, 87-year-old Mattie Miller, like most residents of drought-wracked Central Texas, greeted the sounds of a storm with excitement. "I was thanking God for the wonderful rain," she says. "We needed it."

But when she stepped out of bed to explore, a puddle topped her toes. Water covered the entire floor of her house. Feeling her way around in the dark, she came to the front door, shocked to see a rabbit and a skunk looking for dry land. "I thought about Noah and the Ark," she laughs. "Is God getting us ready for this? – another flood?"

Onion Creek Plantation is a small subdivision nestled between East William Cannon and Onion Creek Park. The creek itself is less than a city block from the modest late-Seventies house Miller and her husband purchased in 1997. Her husband is since deceased, her daughter lives nearby, and her son sometimes stays at the house. On the night of the flood, she was alone.

With the water rising outside, she could not open the doors. "I wasn't afraid," she recalls, describing how she convinced herself to stay focused and not panic. "When I looked out the window, there was so much water [on the street]."

She saw people and began pounding on her front windows. Fortunately this attracted attention, and not a moment too soon: The water from the engorged creek began to flood the back of the house. Neighbors acted fast and came to get her.

She returned the next day – to devastation, as did most of her neighbors. Flooding soaked more than 700 homes, and took seven lives in Travis County. Fortunately, the water in Miller's house, three feet high at its peak, "went down right away. My neighbor's truck submerged right in his garage," she says with concern. "He lost his engine. In my neighborhood, I was [affected] the least." 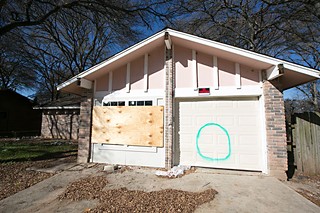 Claudia Patton was neither the hardest nor least hit on her street – less than a mile southwest of Miller. But the feisty, late-50s­ do-it-yourselfer has her own harrowing tale.

Her house backs up to the Onion Creek Greenbelt, and the subdivision that it borders, at casual glance, now looks normal: Christmas decorations dot the street. From the South Pleasant Valley entrance, the area seems draped in open parkland, thick with tall trees and rolling green grass. But upon closer examination, certain odd features become obvious: curb cuts, dozens of them. Each used to be a driveway that led to a house. One click onto Google Maps street view confirms the worst: These houses have disappeared in the last year.

Of what's left standing, there are still houses with the walls blown out, windows cracked, PODS storage units in the driveway, or large green circles indicating an imminent demolition. The area has a long way to go before it truly revives.

Patton's four dogs woke her up that dark autumn night, barking. "I looked out the window and said, 'Oh there's an albino nutria crossing the yard! Oh, no, that's Styrofoam, and it's flooding!'" The water level was up to 10 inches against the glass door, and was beginning to seep into the house. She began "running around trying to put things up on top of tables, counters, or anything." The dogs, she laughs in hindsight, scrambled from surface to surface, knocking things into the drink, while she balanced atop a step ladder. "I wasn't scared," she relays, "but I was worried about my cats and dogs. I kept thinking about that line [from Apocalypse Now]: 'The horror! The horror!'" 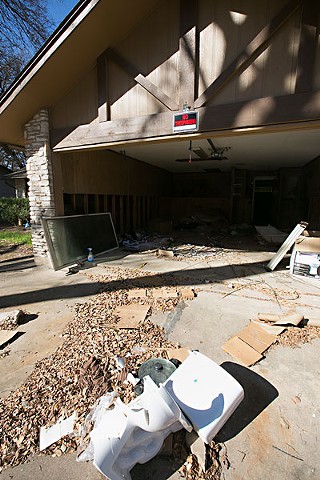 Some homes, ruined by the 2013 flood, are still undergoing repair.

"In the Bastrop fire disaster," says Rory O'Malley, special projects coordinator for Austin Habitat for Humanity, "families were eligible for up to $30,000 in assistance from FEMA [Federal Emergency Manage­ment Agency]. With the Halloween floods, there were 750 families that were impacted. The threshold, to qualify for FEMA assistance, is 800 homes."

As with the Bastrop disaster, what governments could not cover, local nonprofits, faith-based organizations, and emergency volunteers had to. It was up to these groups "to find resources beyond insurance," O'Malley says.

Soon after the waters receded, the city of Austin established Dove Springs Recreation Center as a temporary shelter and access point for caseworkers from various agencies to assess urgent repairs, needs for special accommodations, and insurance limits, and then to assign priorities and match residents with different groups for relief in the form of home and repair services, goods, and logistics.

"After that center was shut down after a few months, there was an ongoing need for case managers," says O'Malley. The Travis Austin Recovery Group emerged in March, 2014 as, according to its mission statement, "a long-term effort to ensure the effective and compassionate recovery for those affected by the 2013 Onion Creek Halloween Floods." It continues to operate. The executive director of TARG is Janice Butler, also the E.D. of the Bastrop County Long Term Recovery Team; Butler's own home was completely destroyed in the Bastrop County Complex Fire of 2011. TARG has benefited from everything hard-learned by its neighbor to the east.

"Texas Baptists Disaster Recovery did extensive work cleaning up the grounds and building a fence," says Poynor. O'Malley added, "The Baptists are tremendous at bringing large groups of people – but they don't come with a materials budget."

That's where collaborative interagency effort comes into play. "Habitat supplied ReStore credits to folks in all levels of recovery," says O'Malley, "from coordinated agencies to independent do-it-yourselfers, like Claudia [Patton]."

"Around day nine, after the floods," says Patton dryly, "Adult Protective Services came by and wanted to know if I was mentally ill." Poynor explains that was "because she stayed in her home, enduring the circumstances. She was basically camping out in her home when we first met her." She's not crazy – just uniquely independent. "When we first offered assistance," says Poynor, "she insisted that her neighbors needed help more."

"Claudia was still living without walls. We took her on as we would any critical home repair client," says Poynor. "We prioritized safety, security, and getting drywall back up. We assisted with plumbing, electrical, and brought in the range, a fridge, countertops – bringing it back to a basic livable state."

"For Ms. Miller," says O'Malley, "St. Vin­cent de Paul and the Second Pulse Society's House-in-a-Box with IKEA provided [furnishings]. The only thing missing was appliances. Austin Habitat discovered that Habitat International has a deal with Whirlpool to purchase ranges and refrigerators for $12 each. And so we did."

Miller and Patton's stories are but two of 750, and both are far from resolved. Patton continues to work on renewal projects as she is able: painting and designing bookshelves, etc. Miller, on the other hand, has reluctantly accepted a buyout from the city. She's moving out of her home, into a nearby neighborhood.

The city of Austin's Lower Onion Creek Floodplain Buyout Project identified properties in addition to existing homesites identified as flood-prone by the Army Corps of Engineers. The corps determined that other solutions (berms, levees, dams, etc.) "would not be sufficient to protect the area from major floods," according to the city's Watershed Protection Department website.

"She's 87 years old, basically she's there by herself. If she has an opportunity to get out and get somewhere safe, I think that's a great thing. I really do," says O'Malley of Miller. "The neighborhood is about half there now. There might not be neighbors to come get her when the water comes over the creek."

"It's hard," says Miller. "I want to cry. I moved into this house with my husband and two children. Now I'm moving out of it; I'm leaving all my memories right here."

As shards of lives slowly come back together, healing begins. According to TARG, more than 50 groups came together to lend their resources to allow flood victims to find and use these pieces in the recovery puzzle.

While Patton insists the trauma she suffered is not too bad, simple things still trigger floods of memory. "Anytime it rains, I jump up and look. It's completely irrational, but I'm positive that water will be there."

Nearby, along McKinney Falls Parkway, development is booming. Among the signs of various home builders, stands the "coming soon" placard for Easton Park, a 1,500-acre master-planned plot under construction, bringing 5,000 new homes, according to the website, "starting from the mid-$200s."

Meanwhile, Mattie Miller's kids are packing all her belongings into a U-Haul, and Claudia Patton still checks her neighbor's yard, where the ground is a little lower, for signs of another albino nutria.

A version of this article appeared in print on December 26, 2014 with the headline: Still Rising