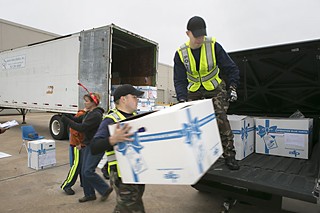 Austin Water formally opened the controversial Water Treatment Plant No. 4 on Dec. 19, with officials and construction teams celebrating the already operational plant, which is pumping 50 million gallons a day to the Jollyville reservoir, with a potential capacity of 350 million gallons.

Live Nation Entertainment and C3 Presents announced last week that California-based LNE has acquired a majority interest in the Austin concert production company. In a press release, C3 owners Charles Attal, Charlie Jones, and Charlie Walker said, "We are excited to join Live Nation and become a part of their global family."

Officer Andrew Pietrowski resigned from the APD on Friday, Dec. 12, after learning that his asinine remarks about "the women's movement" and men "hit[ting] you in public" to KUT's Joy Diaz would get broadcast over the radio. Why anybody of any profession would say "You act like a ho, you get treated like one" to a working reporter is beyond us.

Attorneys for eight victims (including the estates of DeAndre Tatum, Jamie West, and Steven Craenmehr) sued South by Southwest, Bastrop planning firm Traffic Design Consultants LLC, and accused driver Rashad Owens for damages, complaining specifically that the company should have been better prepared for such a risk.

Operation Blue Santa, APD's annual distribution of food and toys to needy families, visited more than 5,000 chimneys on Dec. 20. Started in 1972 when two APD officers gave gifts to 20 families in their patrol area, the program delivered gifts to more than 14,000 children this year.

The American Civil Liberties Union filed a nationwide class-action lawsuit Dec. 16 against the Obama administration, challenging the policy of imprisoning asylum-seeking mothers and children fleeing violence and persecution in Central Amer­ica. The feds have said they hope detention will "deter" other refugees from crossing the border; the ACLU calls the policy "inhumane and illegal."