Public Notice: From the West: the GOP 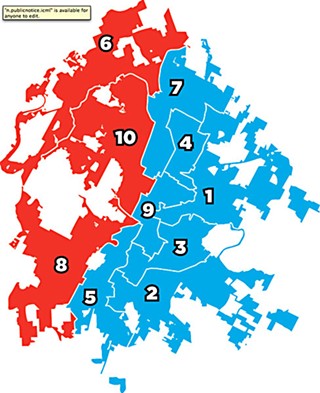 Republicans aren't the sort of minority in Austin that the 10-1 district system was intended to accommodate – but just as surely as we created four "minority opportunity" districts on the Eastside, we created (by necessity if not by design) three GOP opportunity districts on the Westside. And it didn't necessarily have to work out this way, but the run-off races for those three seats came down to three pairs of candidates who all had pretty strong identification with the Democratic and Republican parties. And by the slimmest of margins, the GOP hit the trifecta – with their candidates sweeping City Council Districts 6, 8, and 10, we will have three members of Abraham Lincoln's Grand Old Party on the Austin City Council dais for the first time since ... well, probably forever. Welcome to the diversity that is modern Austin.

Looking to the future, I guess the question is, now that the genie is out of the bottle, is there any going back? Or is the mold set for races in these districts to remain partisan – now that we have de facto partisan incumbents – and inevitably become more so, in the glare of the November election cycle? We shall see. My hunch is, we won't see much difference on the Council dais for a while, as members settle into their surroundings, but there will definitely be some attitude adjustments. Plus the whole business of counting to six on various kinds of difficult votes will take on a new wrinkle.

Here are a few more statistical tidbits on the Council races. The full results are on the next page; feel free to flip back and forth if you need to reference them.

• Interesting that the three partisan races were the only ones that were at all close on election night. Ora Houston, Pio Renteria, Greg Casar, Leslie Pool, and of course Steve Adler, were all clear winners as soon as the early returns showed up – then all widened their leads as the evening went on.

• What does this mean? In all eight Council races and three AISD races, the Chronicle-endorsed candidate did better on election day than in early voting. Martinez and Dealey were the only ones to lose the election day vote, but even they ran stronger than they had in EV.

• It's a shame, then, that there were so few voters on election day. The pathetic 5.8% E-Day turnout doomed Flannigan and Scruggs – especially Scruggs, whose slim 290-vote EV deficit seemed certain to melt away as he ran up six-point margins as the election day votes rolled in ... until they stopped rolling in, and it was clear that there just hadn't been enough people out there to turn the tide. In the end, Scruggs and Flannigan lost those two seats by a combined total of 246 votes.

• But the real surprise isn't so much that Dems lost in the far-flung precincts of Districts 6 and 8 – precincts that longtime Central Austinites tend to think of as South Dallas or out-by-the-lake, if they think of them at all – but that Mandy Dealey, a strong but moderate establishment Democrat, lost by nine points in the closer-in District 10. Of course, she had a much better opponent to deal with: Sheri Gallo, also a strong moderate, and one with some real neighborhood chops as well. She'll be a very interesting swing vote.

• If you're thinking, by the way, that this GOP/Dem map looks suspiciously like the Adler/Martinez map from the first round of voting, don't get too het up about it. There's no doubt that Adler won the Republican vote in this election, but that doesn't mean they'll win his vote on many issues. This paper didn't endorse Adler, because his record is pretty much an empty slate at this point. But he's got a solid liberal background, and continues to say all the right things on the campaign trail and in his victory pronouncements. He's said that this is the moment he wants to lead Austin. He didn't want to be mayor four years ago, and he may not want to be mayor four years from now, but now, with this new Council in this new system, this is the time he wants to lead the city into his "New Way Forward." Again, we shall see. But to take him at his word, he comes out of this election with a clear vote of confidence, and a good crew to work with: new faces, but with a wealth of experience, apparent dedication and enthusiasm – plus, of course, those cranky Republicans out west.

Send gossip, dirt, innuendo, rumors, and other useful grist to nbarbaro at austinchronicle.com.
A version of this article appeared in print on December 19, 2014 with the headline: Public Notice: GOP Sweeps West Austin 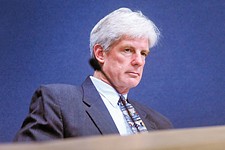 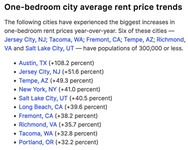