Council expected to delay proposal to 2015

City Council was scheduled to have a final opportunity today (Dec. 11) to consider whether to let a private developer, Decker Lake Golf, LLC, build a PGA-class golf course in an area of town longing for development, at the Walter E. Long Metropolitan Park. Instead, it seems likely the matter will be postponed, since the developer's lobbyist, Richard Suttle, told Council at its Tuesday work session that his client would prefer to wait for the new Council to consider the matter in February. Council members seemed receptive, and several told the Chronicle that they would be happy to let the new 10-1 Council make that decision. And given the fact that Council Members Laura Morrison, Bill Spelman, and Kathie Tovo seemed likely to vote to reject the proposal, the best move for Suttle was to try his luck with a newly elected group. What he told the Council, however, was, "It relieves the pressure that doesn't need to be there on a project that is so good for our city."

After sobering testimony from Austin Water Utility Director Greg Mes­zaros three weeks ago, Council had postponed action to try to get some clarity on whether the water situation is really as dire as Meszaros says it is, and how the golf course could somehow not add to the city's water woes.

Staff from the city's parks department met with officials from the water utility to try to craft a solution to the water problem. The term that the golf course supporters use is "water neutrality" – an idea that had not previously been part of the discussion. Under that concept, even after adding the new golf course, the total amount of water used on all the city's golf courses would not increase; planners also have committed to use reclaimed water. The city's Clay and Kizer golf courses together used 169 million gallons of reclaimed water in FY 2014, according to the city.

But the agreement and a memorandum from Austin City Manager Marc Ott to the Council are short on specifics or guarantees. Ott wrote, "The developer has agreed to develop this project with a neutral water usage requirement that will result in a neutral impact to the overall water use for city of Austin golf courses. They will provide technology training to study player patterns and course usage with the goal to reduce irrigation at the city's five municipal golf courses. This reduction will be in an amount equal to or greater than the volume of water required to irrigate" the new courses.

Council Member Bill Spelman was not impressed. He told the Chronicle, "The question is not: Can we add a golf course and not add water? The real question is: If we can reduce the water needs of all the other golf courses without appreciably hurting the golf experience of the people who use those courses, we should just plain do it. Let's do that now, and then the real question is, having done that ... Then what's going to be the water effect of a new golf course? And that's the position that we're in right now. The whole water neutrality issue is just trying to frame away a problem." The source of the water, Spelman said, doesn't matter – the question is: Does it make sense to use more water on a golf course right now?

Ten members of the city's Water Resource Planning Task Force wrote a letter to Council expressing concern about building a golf course on Decker Lake – a lake the city hopes to use for future water storage. (The developers have agreed not to interfere with that plan.) The task force letter also points out that under the current trajectory, storage in the Highland Lakes "could reach 600,000 acre-feet within the next 12 months, leading the Lower Colorado River Auth­or­ity to declare this drought worse than the [Fifties] drought of record, and triggering 20 percent water use curtailments throughout the basin."

In addition to the water issues, ­ChangeAustin.org activist Brian Rodgers had filed a complaint with the city alleging violations of the city's anti-lobbying rules by Decker Lake Golf. On Tuesday, Acting Purchasing Officer Urcha Dunbar-Crespo ruled that all the communications Rodgers reported as suspicious were in fact legal, and that no violations of the anti-lobbying ordinance had occurred.

And finally, the very last paragraph in the addendum to the agreement between the city and Decker Lake Golf says, "the developer also reserves the right to terminate the agreement without penalty if a tour event commitment from the PGA is not secured prior to the city's issuance of a notice to proceed." There has been quite a lot of discussion about how attractive Austin is to tourists and to the PGA, but the tournament has made no promises. 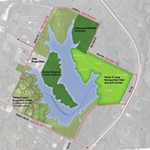