Refugees adjust to life in U.S.

Between October 1, 2006 and April 30, 2014, the U.S. admitted over 103,000 Iraqi refugees for resettlement. According to the U.S. Department of State, "The United States government is the largest single donor to the effort to help Iraqis who are displaced, both inside Iraq and outside the country." Since 2007, the U.S. has provided over $1.7 billion in assistance to Iraqi refugees and displaced people, including food, shelter, health care, and other support.

Despite the millions of dollars the government has poured into assisting with resettlement, the process remains full of shortcomings and challenges, as Austin-area immigrants know well.

Zaid Yassin decided early on to leave Iraq when civil war broke out in 2006. "I did not want to lose my life or a family member to something I did not believe in," Yassin said, explaining that he was considered an "enemy" by all sides because he worked at the American embassy in Baghdad.

Yassin decided to go to Syria to apply for resettlement. He and his family were among the first Iraqi refugees to come to the U.S. in 2007; he now works at Caritas of Austin as a resettlement specialist. It took Yassin eight months to resettle in the U.S. Now, he says, it can take up to six years for a family to complete the process.

In order to get to America, refugees first register with the United Nations High Com­missioner for Refugees in an asylum country. UNHCR then refers cases that qualify for resettlement to the U.S. embassy. Applicants go through a long process of paperwork, interviews, and waiting before learning whether they've been accepted. But Iraqis who have worked for the U.S. government or any other American institution have the option of applying directly in Iraq, Egypt, or Jordan without a UNHCR referral.

Since the expansion of the insurgent "Islamic State" in 2014, 1.8 million people have been displaced in Iraq. However, applying for resettlement in neighboring countries is getting harder. War-torn Syria is no longer an option; Jordan, where Iraqis were once able to enter without a visa, no longer readily grants visas to Iraqi refugees. Turkey remains the one easier option for those who can afford to travel, Yassin said.

Less than 1% of refugees worldwide get resettled in a third country; resettlement is "the option of last resort" for the most vulnerable. UNHCR has established 11 categories of candidates for resettlement, including Iraqis who worked for U.S. agencies, households headed by women, and members of religious minorities.

Once they arrive in the U.S., a refugee agency works closely with immigrants to help them achieve self-sufficiency. The standard period through which refugees get support is 90 days. They receive about $1,125 in cash a month per person. "The amount is usually spent before they arrive, [for] their apartment's rent and furnishing," says Salime Daguer, resettlement senior case manager at Caritas. Other programs are available to help families who are having difficulties achieving self-sufficiency in three months. The maximum period of support Iraqi refugees can get is eight months.

The language barrier is a major obstacle for refugees trying to integrate into Amer­i­can society and find jobs. Ghassan Amdeen, who came to the U.S. as a refugee in 2008 and now works as an employment specialist at Caritas, explains that despite his fluent English and prior knowledge of American culture, it took him more than a year to feel at ease with the new life in the U.S. His wife, who has limited English skills, is still struggling. She tends to rely on her network of Iraqi friends and family members.

On a limited income, professional recertification is often unaffordable. Many former academics and other degreed refugees find themselves working in the service industry. "For someone who used to work as a physician, working in a job that may be looked down upon is challenging. For many, it feels like losing your identity," said Daguer.

Additionally, refugees struggle to adjust to a foreign lifestyle. "Dealing with how things work in the U.S., even the simple stuff like home appliances, can be stressful," Daguer said. One Iraqi refugee new to Austin (who asked not to be named), said that unfamiliarity with life here is a daily challenge, even though she speaks English. "I keep on missing the right bus stop and end up walking for half an hour to reach my destination."

Social workers working with Iraqi refugees express the need for reform to improve the quality of refugee resettlement. "Unlike other case-managed programs, the caseload in the refugee resettlement program is extremely high, which stretches the capacity of social workers who are struggling to provide quality services," said Adelita Winchester, integrated services director at Caritas. Daguer currently juggles a caseload of 80 clients; Amdeen works with 150.*

"We are under the expectation from the government to have someone reach self-sufficiency within a short period, and that is unrealistic. We can help someone reach stability," Winchester said. "We have voiced our opinions to federal authorities that the resettlement period should be decided based on each refugee's circumstances and needs.

"Proper social work is individualized based on each family's situation. We would like to spend more time helping a family that has an illness issue. We do not want refugees to end up homeless. They already come homeless," Winchester added.

One refugee, formerly a journalist, considers herself fortunate to have survived in a country that has witnessed foreign occupation, civil war, and militant Islamic terrorism in the last 11 years. "Every year, we say the situation will get better." Yet, with ISIS gaining control of Iraq, she finally gave up hope for a better future for Iraq earlier this year. "Yes, I had a career, and I was making good money, but what is money worth if I do not feel safe?"

To support Caritas of Austin's work with refugees, visit www.caritasofaustin.org.

*An earlier version of this article incorrectly stated that Zaid Yassin has a caseload of 150; the Chronicle regrets the error.

A version of this article appeared in print on December 5, 2014 with the headline: Iraqis Find a Home in Austin 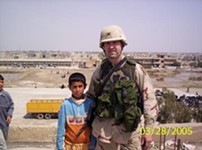