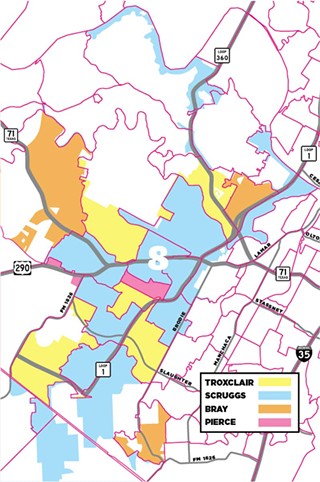 D8: Ed Scruggs trailed by less than a percentage point on Election Night, capturing Circle C Ranch, the epicenter of his campaign, and the Y at Oak Hill, while Ellen Troxclair won the area around Brodie and the eastern stretch of 45, and could claim third-place Becky Bray’s Bee Cave territory in the run-off.

It's not the City Hall Ed Scruggs knew as a City Council reporter for KLBJ-AM in the early Nineties, but sitting beside Ellen Troxclair on the dais for the last forum before the run-off, it was as though he never left.

"I couldn't believe I was in a city where the City Council meetings led the news every night. It was a big deal." Scruggs went to KUT in 1992, where he helped produce SoundSight, a program that recorded newspaper articles for the blind. Eventually he sought a more lucrative career in clinical research for the pharmaceutical industry, before immersing himself in Circle C Ranch politics. Now he's the "progressive" candidate vs. the "conservative" – Democrat vs. Republican – in an officially nonpartisan race.

In what is known as the commuter district, filled with suburban homeowners – often obsessed with traffic issues – Scruggs and opponent Ellen Troxclair both support the proposed 20% homestead exemption on property taxes, but he insists the future Council should exercise caution.

"The homestead exemption is not a magic bullet, and if it's not handled correctly, it could make things worse. That's why I believe we should phase it in – not over 10 years. I think we should make a commitment to do it in three or four years," he said. Scruggs noted confusion from residents over the overall effect they might see. "Sometimes people think, when we talk about the homestead exemption, that it's going to knock their entire tax bill down 20 percent, and that's not the case. It's just [a portion of] the city's portion. I think the fact that the city doesn't have it [means] we're abdicating leadership on affordability."

In an empty City Hall room after her final forum, Troxclair, who takes issue with the Tea Party label that's been ascribed to her, recounted her rise from Capitol intern to working for Rep. Phil King, and finally to chief of staff to state Rep. Jason Isaac, R-Drip­ping Springs, for whom she's worked on state education policy and the budget. Though voters will remember her for the sheer repetition of her campaign's anti-tax message, Troxclair said her experience in the Capitol will help her deal with "micro-level issues" like flood protection and potholes.

Of her support from Jay Wiley, who failed to make the District 6 run-off, she said, "I've known Jay for years, and I have a lot of respect for him. He was one of the people I talked to when I considered getting in the race. He encouraged me to do it, and I'm very grateful that he did. I think he would've made a great Council person, but obviously respect the decision of the voters. In the meantime he's still going to do what he can to make sure a fiscal conservative view is represented at City Council. That's why he's so passionate about helping me."