District 7: Back to the Future 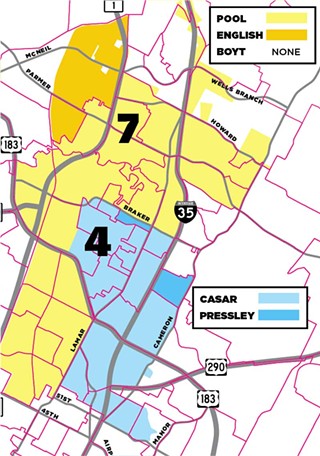 D7: Hard to see where Boyt’s votes are going to come from. Pool ran ahead of him in all 22 precincts, even those she lost to Ed English. An even worse sign for the underdog: his best precincts are also Pool’s best: Boyt broke 20% only in the southwesternmost 236 and 239, and in both of those, Pool was over 40%.

District 7 begins at 45th Street and stretches north, largely between MoPac and Lamar Boulevard, before mushrooming just north of Braker Lane. It ranges over a stretch of land with two distinct developmental patterns, split sharply by U.S. 183. To the south is the "Lower Seven," which begins the 10-1 era holding much of the district's affluence and political strength. To the north, a less developed "Upper Seven" comprises less affluent neighborhoods and a population recognizing its outsider status.

The original eight-horse District 7 City Council race is down to two: Jeb Boyt and Leslie Pool, two veterans of municipal involvement, either of whom would make an adept member of Council. Both live south: Boyt hails from Allandale and Pool from nearby Rosedale – long-established neighborhoods with concerns about rapid city growth encroaching on traditional single-family enclaves. Whoever wins will assume the responsibility of trying to manage the substantial growth in the Burnet and Anderson Lane corridors, while simultaneously figuring out how to inject new life into the neighborhoods north of 183.

To a degree, the two candidates seem to be writing a District 7 version of the District 9 contest between incumbent Council Members Chris Riley and Kathie Tovo, the first-round victor. Riley aggressively courted newer and younger Austin voters who have arrived in a big city anticipating urban infrastructure; Tovo, with a base in Austin neighborhood associations, has often seen her Council role as defending traditional neighborhood priorities.

Boyt, an attorney and longtime civic activist, has campaigned as a "new urbanist" who's eager to find new options to accommodate growth, by planning for development and housing throughout Austin. Like Riley, he's been an advocate for mixed-use land planning, and prioritizes fixing transportation – he supported the failed transportation bond and urban rail plan. By contrast, akin to Tovo, Pool's priority has been "keep[ing] our neighborhoods intact," and finding ways to accept Austin's surging population without forcing D7's traditional neighborhoods into high-density growth plans. She opposed the transportation plan as too expensive, and she also opposes city economic incentives for incoming companies, arguing that most would choose to move here anyway.

Based on the initial round, it looks like Pool's race to lose. She took 32% of the district vote – winning all but two precincts (those went not to Boyt, but Ed English) – while Boyt's second-place finish comprised only 17%. Entering the run-off, Boyt has downplayed Pool's advantage, saying "there's 67 percent that did not vote for her" – while neglecting to mention that even in the two precincts she lost to English, Pool still finished ahead of Boyt. Much like the District 9 race, it may come down to Old Austin vs. New.