Wages up in the Air 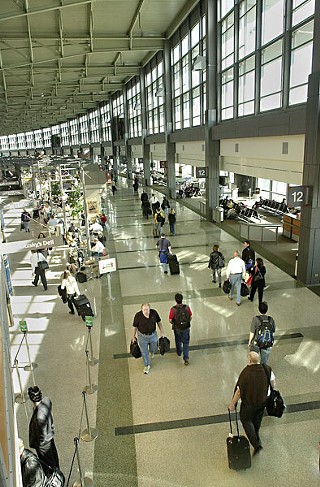 Changes are afoot at Austin-Bergstrom International Airport. Beginning last year and extending through 2017, the city will sink more than $200 million into its quickly-becoming-too-small airport. When all is said and done, ABIA will have an additional 70,000 square feet of concourse space, more than a half-dozen new loading bridges, upwards of 12,000 square feet designated for new concession space, more parking, and an extension to one of its existing taxiways.

Those changes come in addition to the airport's contract with its two concessional operators – LS Travel and Delaware North Companies – running out in 2016. The two companies have operated the vast majority of ABIA's concessions since air transit moved from Mueller to Del Valle in 1999, growing their annual sales total from $13 million that year to an anticipated $43 million in 2014, Delaware North VP of Business Devel­op­ment Nick Schaefer reports. Schaefer added that DNC and LS Travel have paid a collective tally of roughly $47 million in rent to ABIA (and, in turn, the city of Austin) and purchased more than $90 million in local products and services.

It's with those numbers in mind that the two companies converged on ABIA last Wednesday, alongside tenant management staffers, to urge the Airport Advisory Committee to sign off on a 10-year contract renewal set to take effect when the current deal expires at the beginning of 2017. The extension, expected to be approved at City Council today (Nov. 20), promises new shops, new concepts (including an "open chef's table" curated by Paul Qui), and a broadened footprint that should bring new revenue tributaries to the city, DNC, and LS Travel. "Lots of modern, intuitive things to upgrade the experience – but still be Austin," noted Schaefer during his presentation last Wednesday. "This airport has a brand, and we intend to enhance it, not change it."

But the initial proposal – submitted without being put out to bid from other concession and hospitality companies more than 24 months before the preexisting contract expires (Schaefer and ABIA staff maintain that's for reasons of continuity) – did raise a few eyebrows among those in attendance at the meeting. Primarily, the issues stemmed from the approach the two companies were taking toward employment. Schaefer estimated a renewed contract and subsequent expansion would allow DNC and LS Travel to hire a combined 90 new employees (part-time), but it quickly became apparent during their presentation that those 90 would join the current 248 – 65% of whom are minorities – in getting a raw deal.

Under the initial proposal, workers employed by Delaware North would receive an hourly wage somewhere on a scale of $9.15 to $11.15 per hour, depending on the job category. (Schaefer noted: "$9.15 is a cashier.") He reported that LS Travel pays workers an average wage of $9.82 per hour, with $1.57 in benefits – including parking, meal allowance, and money towards a 401k – bringing the amount to $11.39. DNC's benefits package amounts to $2.01 per hour. Both wage figures fall below the city's living wage standard of $11 per hour (not including benefits); but that provision doesn't directly apply to subcontracted employees of LS Travel and DNC, despite their working on city property on a city contract for a procurement of services that are (in theory) competitively solicited by the city of Austin. (The company is exempt from such standards because of the policy's first bullet: "There has to be a similar job classification as a COA employee classification.")

The two companies eventually agreed to comply with a proposed amendment recommending Council require the two companies "be in compliance with the City's living wage policies," but that's ultimately a moot request. Both companies are in compliance with City wage policies – as they're written today. Any required wage increase must first derive from a change to city policy redefining which companies are required to adhere to living wage standards. (Shades of White Lodging's 2013 JW Marriott hotel standoff.)

Also coming before Council is a recommendation that both companies be required to comply with the city's Universal Recycling Ordinance and ABIA's pre-existing waste diversion goals. Schaefer said his company takes certain environmental precautions already (such as eliminating Styrofoam and introducing a program to reduce oil waste), but figures from a recent Annual Sustainability Report show that in 2013, while more than 300 tons of terminal waste was recycled, another 2,053 tons were sent to the landfill. ABIA Environmental Man­ager Kane Carpenter recommended an annual waste audit handled by an outside waste diversion expert. The goal, in accordance with city goals, is for ABIA to reach Zero Waste by 2040 – a date only 13 years away from the pending conclusion of this renewed contract.

This article originally implied that construction will include a new runway. Rather, a preexisting runway is receiving an extension. 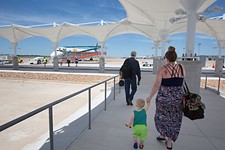 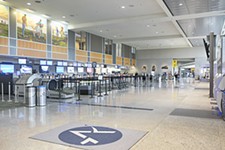