A Few Rounds Over Decker 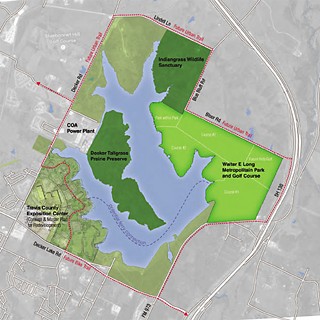 Does Austin need a golf course at Decker Lake?

City Council is expected to decide today (Nov. 20) whether to let a private developer, Decker Lake Golf LLC, create what has been billed as a PGA-class golf course, plus two other courses, on 718 acres of currently underutilized land at Walter E. Long Metropolitan Park.

Joe Ogilvie, the promoter and major force behind the project, envisions raising $25-27 million from private investors to create a professional golf course that could lure the PGA Tournament to Austin. In addition, he and others foresee the project providing revenue to the city's struggling Parks Department, as well as a tourist destination for visitors staying in Austin's Downtown hotels. Ogilvie, who just retired from the PGA Tour, envisions a world-class golf course and a smaller, easier course designed to help kids learn how to play golf in 2018. If all that works out, another course would be added later.

Ogilvie and his partners did not just come up with the idea of turning the land into a golf course on their own. Last spring, the city issued a Request for Qualifications and Decker Lake Golf got the nod. The idea of turning part of the undeveloped parkland into a golf course has been a city proposal for many years. Depending on whom you ask, providing the land for golf is a necessary step in funding Austin's parks, or a step down a treacherous path toward privatization of numerous city properties.

An ad in last week's Chronicle from ChangeAustin.org warns, "Don't let them take our parkland," and features an armed robber grabbing "parkland for peanuts." ChangeAustin's Brian Rodgers scoffs at the notion that the city needs a public-private partnership in order to have a first-rate park, and questions whether the city should be using its precious water supplies for a golf course. Ogilvie says he will plant drought-resistant grasses and use reclaimed water.

Mayor Lee Leffingwell supports the project, noting that Austin residents will get a discount (city documents reflect 40%) on greens fees. He said, "Without this project, it will remain what it is now, which is kind of a wild unimproved area surrounded by barbed wire fence. This is an opportunity to get a world-class facility that will potentially attract the PGA Tournament here, at no cost to the city.

According to projections from the Austin Convention and Visitors Bureau, direct construction spending on the course and club house would begin in 2015 at $1.6 million, and accelerate through 2017 to $8.4 million. The ACVB projects revenue in the first year the course is open at more than $3 million, with the city's share at about $129,000.

But for District 1 candidate and likely future Council Member Ora Houston (she entered the run-off campaign with 49% of the vote), this Council should leave the question to the new 10-1 Council that will be sworn in Jan. 6.

Mayor Pro Tem Sheryl Cole disagrees. "We have a crisis with our parks and adequately funding them, as we have seen in several budget sessions," Cole said. "So we have to be open to public-private partnerships. It is my understanding that neighborhoods in the area have been consulted and they are generally in agreement with the proposal." She added that she is not inclined to postpone ongoing Council work in deference to the incoming Council. "The city still has to function. We still have to make decisions."

Barbara Scott, president of the Colony Park Neighborhood Association, is one of the neighbors looking forward to the changes a world-class golf course might bring their community. Scott said, "Our position is, we're backing the golf course because we need development out here. We are looking for revenue from the golf course." In addition, she said, the neighborhood needs grocery stores and other things that come along with such a facility, in an area that has only convenience stores and few jobs.

Council Member Laura Morrison raised other questions, however. Do we need another golf course? Is golf a good use for that land? Will it be a benefit or burden to surrounding neighborhoods? What will be the impact of a major event on the area?

Morrison also questions the long-term viability of golf. "What's driving the need for more golf courses?" she asked, pointing out that the city just bought the Grey Rock Golf Course in Southeast Austin for $9 million. Morrison was the lone vote against that purchase.

According to Bloomberg News, "Only 14 new courses were built in the U.S. last year, while almost 160 shut down, the National Golf Foundation said. Last year marked the eighth straight year that more courses closed than opened." The article also notes that 400,000 players left the sport last year. Ogilvie discounts that trend, saying golf courses were overbuilt in places like Ohio and Wisconsin, adding that the Austin area has 100,000 golfers and 47 or 48 courses.

There's also the matter of water. The Austin Water utility has worked to encourage residents to cut back on outdoor water usage. Critics ask what it will look like to downstream rice farmers who have been deprived of water for their crops if Austin puts in a fancy, water-guzzling golf course. What does it say to residents who have been urged to cut their usage during this persistent, statewide drought?

AWU Director Greg Meszaros is careful not to criticize another department's plans, but does acknowledge, "There are some risks with this. ... We have some concerns from a water perspective." He adds, "A large golf course development on city-owned property might be insensitive ... but we're trying to make it more sustainable" by working with the developer to service the course with reclaimed water.

Parks department spokeswoman Rachel Crist said 65 people attended an open house Monday to hear a presentation and leave comments about the golf course. She said she observed a more or less equal mix of people favoring and opposing the project. According to Crist, the department was compiling the comments and would have them available for Council today.