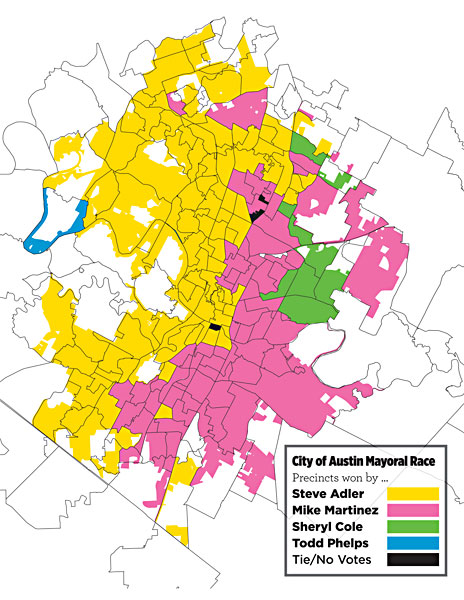 The 10-1 City Council run-off campaigns proceed, with an Austin Monitor poll reporting attorney Steve Adler with a commanding 56-35% lead over Council Member Mike Martinez, despite an initial round 37-30% vote. The run-off is Dec. 16; early voting Dec. 1-12... Comes in Colors: In the wake of the Austin Monitor poll, mayoral candidate Adler has been polishing his diversity credentials with endorsement announcements from prominent Hispanic, African-American, and Asian-American supporters... Mayor Pro Tem Sheryl Cole, who finished third on election day, has declined to issue an endorsement of either Adler or Martinez... Todd Phelps, who finished fourth with 10% of the vote, has endorsed Adler, and the Martinez campaign was quick to note that Phelps is a Repub­lic­an... Speaking of Republicans, D10 also-ran Robert Thomas announced his support for Adler as well... The E-Day voting map reflected a striking East-West geographic split between Martinez boxes and Adler boxes, although both run-off candidates are insisting they're running to represent "all Austinites"... District 7's Leslie Pool seems to have safety on her side: This week she scored endorsements from the Austin Firefighters Association and Austin-Travis County EMS Employees Association, as well as from the Workers Defense Action Fund, Better Austin Today PAC, and the Austin Heritage Tree Foundation... D3's Sabino "Pio" Renteria attracted endorsements from the EMS Employees Association, Austin Young Demo­crats, the Austin Police Association, the Austin Firefight­ers Association, and the Work­ers Defense Action Fund... In addition to Renteria and Pool, the Austin Fire­fight­ers Association is getting behind Ellen Trox­clair in D8 and Mandy Dealey in D10... Travis County Judge-elect Sarah Eckhardt has thrown her support behind D4's Greg Casar, D8's Ed Scruggs, D6's Jimmy Flan­nigan, and D10's Mandy Dealey... Former D6 candidate and infamous Gamergate-supporter Mackenzie Kelly endorsed D6 run-off candidate Don Zimmerman... And it looks like outgoing Mayor Lee Leffingwell is giving the nod to Dealey in D10... Despite some membership calls for a withdrawal of ANC endorsement of D4's Laura Pressley, Austin Neighborhoods Council leadership has reiterated its earlier endorsements. On the ANC listserv, some members called for a reconsideration after reports surfaced of Pressley's claim that explosives were "planted" in the World Trade Center before the 9/11 attacks; other ANC members defended Pressley, including VP David King, who called the reports Rush Limbaugh-style "gutter" tactics, and Susana Almanza campaign manager Daniel Llanes, who called the WTC attacks an "inside job" and listed other "government lies," including, apparently, the murder of John Lennon.