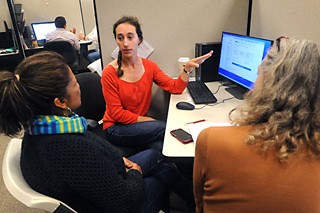 On Saturday, Nov. 15, Obamacare enrollment begins again. While the first enrollment period got off to a disastrous start last year due to numerous technical difficulties, ultimately some 615,000 Texans were able to purchase health insurance using the Healthcare.gov marketplace.

This second enrollment period is a chance for people who are uninsured to buy new plans, as well as a chance for those already enrolled to evaluate their plans, update their information, and decide whether a different plan might be a better fit, especially since new plans (there are 115 this year, compared to 80 last year) and insurance companies have been added to the mix this time around.

The Affordable Care Act (ACA) has been greeted with hostility and suspicion by many Americans, including outgoing Texas Gov. Rick Perry. But at a press conference Monday, Nov. 11, U.S. Rep. Lloyd Doggett and members of Insure Central Texas were eager to clear up misconceptions. People might not like the sound of "Obamacare," but that doesn't mean they can't benefit from being able to purchase health insurance that isn't tied to their employer, or from tax subsidies to help them pay for that insurance. Doggett also made sure to mention that one of the important changes brought on by the ACA was the end of insurance companies being able to exclude pre-existing conditions from coverage.

For example, Elizabeth Flandez lost her health insurance a few years ago after getting a divorce – she'd been covered by her husband's plan. She had the option of buying insurance from her own employer, but couldn't afford the monthly premium. Instead, she chose to go to clinics and pay cash whenever she was sick. Then, last year, she was told she had a tumor. Luckily, she was able to enroll in an ACA plan with an affordable monthly premium – another part of the law defines "affordable coverage" as costing no more than 9.5% of a person's monthly income. Before the ACA, if she had tried to buy insurance after receiving a diagnosis, she would have likely had to pay for any costs related to that condition herself, assuming an insurance company was willing to cover her at all.

Buying health insurance can be extremely daunting. It's even more confusing when a customer has never had coverage before. Gary Amaon, a volunteer ACA navigator, said it's common for him to have to explain how insurance works to people who come in for assistance. However, Austinites intimidated by the prospect of Healthcare.gov can find knowledgable, free guidance seven days a week from the navigators at the Insure Central Texas Highland Mall location. They have Spanish- and Arabic-speaking employees on hand, offer Viet­nam­ese-language services on Mondays and Saturdays, and can schedule appointments with interpreters for people who speak other languages.

Unfortunately, some of the Texans most in need of affordable health insurance aren't going to be able to find it on Healthcare.gov. The ACA was designed to expand Medicaid coverage to low-income people. However, it's up to individual states to choose whether to go ahead and offer Medicaid to more of their adult residents. In Texas, this has meant that more than 1 million people who would qualify under the expansion have no coverage, and don't make enough money to get tax subsidies to help pay for insurance (though they can still enroll their children in Medicaid or CHIP and purchase an ACA plan for themselves at full cost).

Elizabeth Colvin, director of Insure Central Texas, stressed that even if someone believes they're in the "Medicaid Gap," they should still come by and discuss their options with a navigator, who can check to see whether they're accurately projecting their income for the next year, help make sure their children have insurance, and offer referrals for other local health care assistance programs if they turn out not to be eligible for ACA assistance after all.

For his part, Doggett hopes that Texas will change its mind about expanding Medicaid. If nothing else, it could help cut taxes if the state accepted the federal Medicaid money. "If you're not moved by your heart, get moved by your pocketbook," he said.

Visitors may drop by any Insure Central Texas location without an appointment. For locations, visit www.insurecentraltexas.org or call 512/610-7963. (Hours and languages spoken vary by location.) For additional assistance: localhelp.healthcare.gov or 800/318-2596.