Glenn and Paula Foore are tired. It is etched upon their beleaguered faces and weary eyes. Springdale Farm's days may be numbered, and it's weighing heavily on the owners of the East Austin urban farm. According to Glenn, the City Council meeting on Nov. 20 will make or break Springdale Farm's future.

Following a heated public debate, late last year, over an updated urban farm code, the controversy subsided somewhat after Council adopted code revisions in March. Initiated by a neighbor's complaint about odors emanating from a temporarily out-of-balance composter at HausBar Farms, the yearlong debate engaged a maelstrom of urban agriculture, gentrification, and race. Balancing appropriate land use amid single-family zoning – while supporting a local food system and community needs – remains a complex conversation, with many conflicting interests.

Last year, the Foores advocated for the proposed urban farm code updates recommended by the Sustainable Food Policy Board. Now, however, the intricacies of the updated code – compounded by a campaign by some Eastside activists to shut down the farm – threaten Springdale's future. Under the new code, urban farms are allowed to host events with more than 50 people six times a year, after receiving a temporary use permit; but that provision doesn't apply to Spring­dale, which is zoned commercially. The farm needs a conditional use permit (CUP) in order to continue hosting events such as fundraisers, weddings, or other farm-related events. However, only when Springdale Farm prepared to apply for its CUP did the Foores discover a conditional overlay – enacted eight years after they purchased the property – which prohibits outdoor entertainment.

According to the Foores, these events are built into their business model and are critical to sustaining the farm. Edwin Marty, urban farming expert and food policy manager for the city's Office of Sus­tain­ability, says that allowing Springdale Farm to host events is critical not just for the farm, but for the local food system, as it's difficult to maintain economic viability through produce sales alone. "Losing an institution like Springdale Farm would be a significant blow to the community and a significant setback in what we're trying to do if we allow farms to disappear," Marty said. "It's more than just a farm – it's part a local farm community with deep ties to the local restaurant community. It would be a statement that we are not supporting what we aspire to do in our 30-year comprehensive plan."

Springdale is asking to modify the conditional overlay to remove the prohibition on outdoor entertainment. In an Oct. 28 Plan­ning Commission meeting, the farm also requested the termination of a restrictive covenant stating that if the farm ceased to run its landscaping business, its zoning would revert to Light Industrial and Single Family. Further, the farm sought to change the Future Land Use Map (FLUM) from Single Family to Mixed Use, to reflect the existing uses of the farm.

Planning commissioners voted to revise the conditional overlay and allow outdoor entertainment, but did not specify the number of permitted events. Jerry Rusthoven of the Planning and Development Review Department suggested 30, but according to Commissioner James Nortey, the exact number would be a compromise best made between the neighborhood and Springdale. The Planning Commission also voted to terminate the restrictive covenant, but rejected the FLUM amendment.

Next week, the recommendations move to Council; if Council agrees, Springdale would still have to return to the Planning Commission for CUP approval.

Meanwhile, the Govalle/Johnston Ter­race Neighborhood Contact Team, chaired by Daniel Llanes, would like to close the farm altogether. At the Planning Com­mis­sion, Llanes cited traffic, safety, and noise issues from farm events. Angelica Noyola, president of the Montopolis-Ponca Neigh­bor­hood Association (and education coordinator for PODER), photographs people leaving the farm and has called 311 to file code complaints more than 422 times. Noyola says that, although she does not live near the farm, her family owns property nearby, and each call represents a separate incidence of impropriety – public intoxication, lewd behavior, littering, or parking violations. Noyola also disputes Springdale Farm's shared parking agreement with the (currently closed) Allan Elementary school.

Then there's Eden East, the farm-to-table mobile food trailer located on the farm; Llanes and Noyola argue that each of the two nights a week the trailer is open should count as an event – part of the overall 30 events currently under discussion for Spring­dale – and claim that patrons leave the restaurant drunk, throwing bottles and cans on the ground.

Yet Matt Garcia, who has lived in the neighborhood for six years and whose house sits directly across the street from the farm, did not sign the petition and adamantly disagrees with the claims by Llanes and others, adding that he can see what's going on at the farm and Eden East from his front door and windows. "I've never witnessed it. I've never seen anything that I thought was lewd for sure. There's a police station literally a tenth of a mile from the farm and there are tons of cops up and down Spring­dale [Road]. I've never seen trash in the street or accidents. I've never had a time where I've had an issue. In my opinion everyone has been very respectful and aware that it's in the middle of a neighborhood."

Eden East's chef/owner Sonya Coté disputes the claims as well. In an email to the Chronicle, Coté wrote that Eden East does not sell alcohol on the premises and instead offers a unique, straight-from-the-source dining experience. According to Coté, neither Llanes nor PODER has ever contacted her concerning Eden's policies. "All of our waitstaff are trained & certified by TABC. My GM had a TABC officer out to the farm less than a month ago to ensure that we are doing everything correctly. We are. We have a parking lot with a Dumpster plus recycling that is picked up weekly. My staff and I continue to maintain the area with weekly yard maintenance, and I have a cleaning crew come out once a week. ... Eden East is legally within its right to be on the farm as a food truck. All inspections are current, and we work diligently with the Health Depart­ment and we are compliant with all code."

Noyola's tales were apparently shared with the 22 of 33 households within 200 feet of the farm who signed a valid petition against the zoning change – Llanes says he communicated with each and every petitioner. Due to the petition, Springdale Farm will need a supermajority – six of seven City Council members – to vote in its favor.

Urban farms have been a simmering issue in the District 3 Council race, where Susana Almanza, a steadfast opponent of the revised urban farm code, is currently in a run-off for the D3 seat against her brother Sabino "Pio" Renteria (Llanes is a member of Almanza's campaign team). Nevertheless, Almanza declined to comment on the Springdale situation.

According to Marty of the Sustainability Office, there is a need for open and sincere discourse moving forward. "We need to compromise to preserve the character of the community balanced with the need of a local, small business to stay viable. I am certain that if there's better dialogue, with a sincere attempt to come to a compromise, that all parties will have what they want." 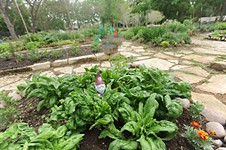