Through a Glass, Darkly

Inmate visitations at TCCC are held through video-enabled computers

Twenty years later, Jorge Renaud still remembers what it was like to have a visitor.

"You're not sure when they're going to be there," the two-time inmate explained. "So you get ready.

"You have this period of freshening up. You get yourself together: It's the ritual of the visitation. They call your name, and you get this sense of gratification. There's this sense of, 'Someone's taking their time to see me.' You walk down the hall and your kids jump up, or your girlfriend jumps up."

That memory stems from a 1993 stint in county jail, when many Texas counties still had policies that allowed for contact. Renaud, now a policy analyst at the Texas Criminal Justice Coalition, recalls: "You could still hug your loved one."

But a lot has changed with inmate visitation policies since then – especially in county correctional facilities. At the Travis County Correctional Complex in Del Valle, visitations have gone, initially, from contact to meetings through Plexiglas; now, those who want to visit their loved ones can do so only from a video-enabled computer. Since 2009, video-only visitation has been the norm at Del Valle, when the massive sixth housing unit – Building 12, which houses 1,230 inmates – became operational. In May 2013, the jail went video-only in its five other houses. Today, inmates sit down at one of 185 screens.

Securus Technologies, the Dallas company that contracts with Travis County and 10 other Texas counties (three more are anticipated), offers a video visitation line that's akin to a Skype call through bad wi-fi. At times, the audio cuts out, and cameras are arranged so that you're looking down from above; often, instead of your eyes, inmates get a better look at your receding hairline. And for the technically challenged, using the equipment can be difficult.

The video sessions also cost friends or loved ones significant fees – though on the other hand, for remote visits, you don't have to deal with the visitor's center, schedule a babysitter, or perhaps drive a long distance. At the moment, thanks to a temporary promotion, those with proper equipment can schedule a remote video session for 20 minutes, at a cost of $0.50 per minute. At other times, the fee jumps to $1.00 per minute – with 23% of gross receipts going to Travis County. (Free on-site video terminals are available, but inmates are allowed only two 20-minute sessions per week, excluding attorney visits.)

That's the mixed pitch directed toward potential visitors. For jail administrators and inmate security staff, the sale is much easier.

"Imagine no longer having to move inmates, service long lines of visitors, and manually manage visitation schedules," Securus' Video Visitation notes in its online sales copy. "What types of efficiencies could be gained by eliminating these burdensome tasks? Could you increase focus on the safety and security of inmates, your officers, and the public you serve? Could operating expenses be reduced by providing jail officials with a more convenient way to visit with an inmate? Could budget shortfalls be resolved by creating a new revenue stream?"

To all those questions, Travis County has answered yes.

But consider the inmates and their families. Recalling the tangible joy of an in-person visit, Renaud says, "You're not going to have that. You're going to walk to the back [of the housing unit, to the video equipment], and still have people around you snoring and farting. You don't get to leave this atmosphere and go to this place where your family's waiting for you."

But a few weeks before the contract renewal, two advocacy groups – Grassroots Leadership and the Texas Criminal Justice Coalition – released a study arguing against video-only visitation. Analyzing open records documents, they report that both violence and contraband have increased since the initiation of video-only visitation. Disciplinary infractions at TCCC have climbed from 828 in May 2012 to 1,150 in April 2014; disciplinary cases for possession of contraband are up 54% since May 2013; and inmate-on-inmate assaults have increased 20% over the two-year period.

"Most troubling," the study notes, "inmate-on-staff assaults immediately doubled after elimination of in-person visits, going from three in April 2013 to six in May 2013," after video-only visitation was fully implemented. Seven such assaults were reported in July 2013; in April 2014, there were eight. (It's a relatively small sample, and the study acknowledges "slight declines" in the intervening months.)

"We're being careful to say there's not a direct correlation, but it certainly hasn't decreased violence," says Grassroots Lead­er­ship's Kymberlie Quong Charles, who argues that there's a necessary human, physical element in face-to-face interactions. "Even through Plexiglas, it allows you to see the color of [an inmate's] skin, or other physical things with their bodies," she adds. "It's an accountability thing, and lets people on the outside get some read on the physical condition of a loved one. If there are concerns, it gives people on the outside a tool."

TCCC jail administrator Major Wes Prid­dy discounts the study's findings: "There are many things that affect our system. They kind of cherry-picked certain data points to fit their narrative," he noted, adding that he's never received a grievance or complaint from inmates about the systems. "They're usually pretty good about making sure their grievances are known."

Priddy notes that the jail still employs the same number of staff – one guard per 48 inmates, in accordance with Texas policy – and that the benefit has been largely to contain congestion along the inmate "mall": the fenced-in pathway that connects TCCC's many buildings. When Building 12 was added five years ago, the complex faced a critical mass issue. If the county didn't move to video-only visitation, he says, it would have had to have built a "substantially" larger visitation center.

"We made the decision to go to video visitation in order to improve security in our facilities," says Priddy, "and to save money in the process." 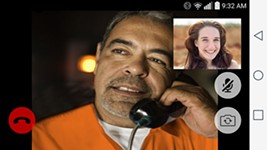