Reji Thomas Has Left the Building 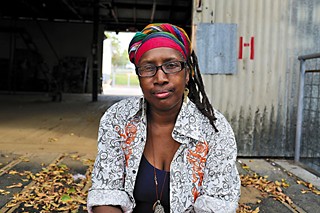 A dozen impassioned pleas at the Oct. 27 meeting of the city's Historic Landmark Commission, on behalf of Pine Street Station, was not the Hail Mary pass completion that Reji Thomas and her supporters had hoped would make a convincing case to save the threatened East Fifth Street building. More than 50 people attended the Oct. 27 session – most of them supporting historic zoning. Thomas contends that what remains of the old structure has historic value as one of Austin's last standing railroad buildings. Twenty people spoke, 18 supporting Thomas, among them Cynthia Perez, former owner of beloved Congress Avenue cafe Las Manitas, lost to "progress" in August 2008. Capital Metro Community Involvement Manager John-Michael Cor­tez also spoke. "There are no plans to demolish that building at present," he reassured the crowd, explaining that due to a recent court decision, Cap Metro – no longer Thomas – now owns it.

The dominant testimony was not legalistic. Heartfelt arguments about the importance of Thomas' work – from her glasswork in the Nineties renovation of the Capitol, to creating a vibrant cultural hub on the Eastside – dominated, although only architectural or structural evidence would meet the commission's criteria. The commission initially voted 3-1 to approve historic zoning, but with only a quorum present, needed unanimity – so deferred a final decision until the next meeting (Nov. 17).

Thomas established Graphic Glass Studios at 1101 E. Fifth in 1979. Friends were dubious about the dilapidated warehouse, but the space was perfect for Thomas: unconventional, rough around the edges, but bursting with potential. She has worked in photography, painting, drawing, metal, and stonework, but is best known for her glasswork. In the mid-Nineties, she won the bid to replace all of the intricate, etched glass in the Capitol, creating more than 500 panes; her art has been collected by Ann Richards, Barbara Jordan, B.B. King, and Steven Spielberg.

In 1987, the land under the building had been purchased by Cap Metro from South­ern Pacific; Thomas had already purchased the building from her original landlord. She describes her years dealing with Cap Metro as "cordial – a good working relationship," paying rent to the transit agency to occupy the land.

These increases happened, said Cap Metro spokesman John Julitz, because the Texas Sunset Commission had concluded that the agency was not maximizing the value of its real estate assets; after a market analysis, Cap Metro adjusted rents for all tenants. "Capital Metro incorporated gradual rent increases up to market rates over a five-year period," Julitz said, "in order to accommodate Ms. Thomas and other renters." And were the rates re-evaluated today, Julitz noted, "The market rates would be considerably higher than in the current lease agreement." Currently, the Travis Cen­tral Appraisal District appraises the land at $1,980,225, and the building at $169,177.

About two years ago, Thomas says, Cap Metro's real estate manager, Vincent San­doval, informed her of the agency's intention to develop the property as part of its larger Plaza Saltillo mixed-use project; he asked what she'd accept to sell the building. Negotiations began in earnest in late 2013, she recalls, and she says Sandoval regularly mentioned that the parties would meet to negotiate financial terms and a time frame for her release of the building.

"Mr. Sandoval told me that their intention was to demolish by the end of 2014," says Thomas. Cap Metro commissioned archaeological and historical assessments, which concluded there were "no archaeological sites within or adjacent ... and the potential for prehistoric sites is low." The building itself, the reports concluded, is "not eligible for listing in the NRHP [National Register of Historic Places]." (The city's Historic Landmark Commission, now reviewing the case, designates local historic landmarks.) In June, the Cap Metro board announced that it had chosen the Endeavor Real Estate Group (best known locally for the Domain in North Austin) to redevelop Plaza Saltillo.

"Capital Metro and I have had verbal agreements for years on Fader, the farmers' market, et cetera, that have been honored," says Thomas. "I've had a good-faith relationship with Capital Metro into the majority of this year. This whole time we are – I thought we were – negotiating, Vincent Sandoval never mentioned back rent except to offer to roll it into a buyout.

"All sorts of things were discussed and offered – never in writing. Things like trading for a [nearby] property, rolling in back rent, moving the building, but never that they'd take the building."

Cap Metro spokesman Julitz characterizes the exchanges differently. "We had been communicating with Reji since last spring about persistent delinquent rent," he says. "We sent her notice in July that she was in default on her lease." Unable to reach agreement with Thomas, says Julitz, "In Septem­ber, we initiated the legal process. ... The offers and negotiations did not reach a stage for a written offer until just prior to the eviction hearing."

In Cap Metro's "Complaint for Forcible Detainer," the transit authority asserts that Thomas "failed to pay Landlord material rental payments of approximately $13,500" (roughly five months' rent). Thomas insists that over this period verbal negotiations were ongoing – including provisions to resolve back rent not paid during this negotiation period.

In the Oct. 1 hearing before Judge Raúl González, Justice of the Peace, Precinct 4, Thomas did not dispute that she'd been behind in rent. She says she explained to the judge the nature of the informal, ongoing negotiations with Sandoval. According to Thomas, Cap Metro's attorneys told the judge that Sandoval did not have the authority to make such offers. Julitz now says, "All items were open for discussion during a [settlement] negotiation, and the settlement offer included forgiveness of any obligation for back rents due," and that Sandoval did indeed have that authority.

González ruled for the agency, awarding Cap Metro possession of the building – and gave Thomas five days to move 35 years' worth of belongings out of what was now Cap Metro's building. She was made aware that she could appeal, and she says she did. Unfortunately, says Thomas, the appeal was filed to (and accepted by) the wrong court. Currently, Thomas is left to explore her dwindling options. "We own the land and technically, she owned the building," explains Julitz. "We essentially had to evict the building from that land. And certainly, as building owner, she would have the right to move the building, if she had the means."

After the court order to vacate, Cap Metro extended deadlines and allowed Thomas more time to move. On the phone, Julitz told the Chronicle, "It's a balancing act: what's best for Capital Metro, but at the same time not to appear, you know: Get out! We own the building!"

On Saturday, Oct. 25, at Pine Street, every corner of the building was covered with gear, art supplies, artwork, and furniture, ready to be loaded into a tractor-trailer. Tall, noble planks of etched glass awaited their delicate turn.

Thomas has friends and options; she'll be fine. Her art won't stop. She's been "blown away," she says, at the outpouring of love for what she's done to create community in Austin. "I thought I was just going to do these great art pieces," reflects Thomas, "but ended up with a way to provide artistic support in ways I never guessed. Artists would come here – after getting a degree, $150,000 in debt, and stuck selling pizza – and by sustaining this old building, and encouraging creativity by whatever means, we filled a void that even higher education couldn't. Now, we don't have a say-so. We don't have a right to be here."

But every time she's down, Thomas rises. There's art to move, and work to be done. 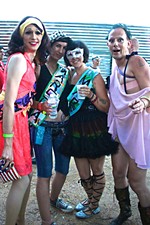 The Good Eye: Summer Camp
Notes on QueerBomb's profusion of glitter and camp 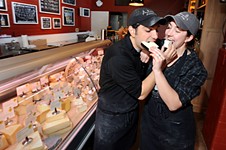 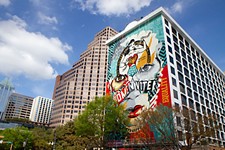 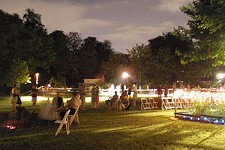 Arts Bullets
Physical Plant Theater's first Garden Party raised more than $8,000, Ann Hume Wilson has been appointed associate director of the Blanton Museum of Art, Blue Lapis Light is exhibiting – and auctioning off – bras and breastplates for angels, and the city unveils a new mural at the Pan Am / A.B. Cantu Recreation Center