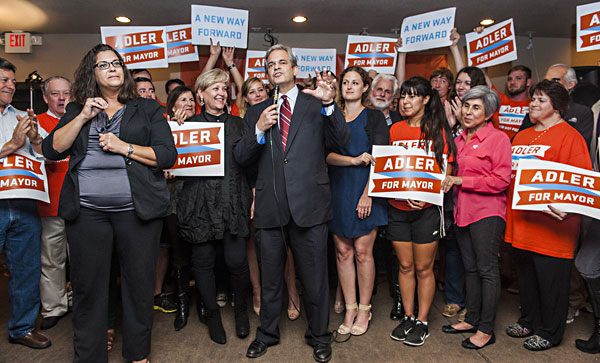 "The New Way Forward" vs. "Keep Fighting for the Middle Class"

The liveliest party of the evening – although that greatly depended on an itinerant reporter's timing – was at Steve Adler's campaign headquarters on Barton Springs Road, where the band played "La Bamba" while the only man present wearing a suit was besieged by well-wishers. ("I've got my jeans in the car," Adler complained, and blamed the formality on his staffers.) Adler and his campaign had plenty of reason to be happy, having led the night's calculus from the get-go and still doing so as the late news passed. In a quiet corner, the candidate said he didn't expect the vote to change much, and it didn't: What began the evening with Adler 38%, Mike Martinez 29%, ended a little tighter – 37% to 30%, a comfortable if not conclusive lead heading toward Dec. 16.

The candidate and his campaign are confident – "excited that the voters want to move forward in a new way ... and are ready for a change." He pointed out that between them, "eight-year incumbents" Martinez and Sheryl Cole did not achieve 50% (roughly 44% together), and said that in the next month of campaigning, he can move from building "name ID" to "giving people a real choice." 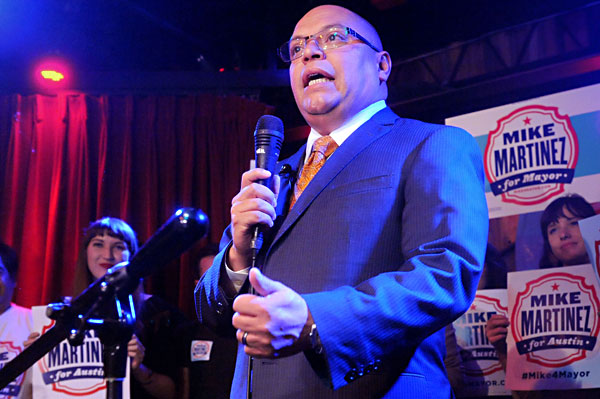 Over at the Rattle Inn on Nueces, the Mar­tinez campaign was equally upbeat – "He spent $1 million for his 30% and we spent $400,000 for ours," declared campaign manager Matt Parkerson – and the candidate equally determined. "We're going back to work immediately," said Martinez, "and continuing to fight for the middle class – so that prosperity and opportunity are shared with everyone, not just a few." Martinez also didn't expect the final returns to change much, but said he believed they were in a good position entering the run-off. "We intend to win it."

Martinez also had a few kind words for opponent and Council colleague, Sheryl Cole – they'd left voicemails, but hadn't quite managed yet to connect directly. "She made a good showing, and has been a great colleague," he said. "She's to be congratulated for her campaign, and thanked for her long years of service for the city."

A few minutes before, the atmosphere was subdued but convivial at the Clive Bar off Rainey Street, where Cole was still hosting a small group of supporters. She took a few minutes to reflect on the whirlwind of the campaign that had ended so abruptly – she had conceded very quickly after the disappointing early results. She said that despite her disappointment, she was pleased so many voters had supported her, and wished "Mike and Steve" the best of luck going forward – although she hadn't yet thought about a possible endorsement. "Austin is a city that cares," she mused, and said she hopes to continue to serve in some capacity, but that she hadn't begun to think about what that might be. Come January, she said, "It will be time for family and friends," and she looked forward to being "just friends" with old acquaintances, and not always a "public official."

Cole said she's glad that with the coming of 10-1, "the 'gentlemen's agreement' is now dead," and she believes her opponents understand that "diversity matters," and that they must continue to show that "diversity is a strength" of the city. As for the new crop of incoming Council members, she said, "they'll learn ... especially when the first issues appear that go beyond their particular district, and affect the whole city."

Her earlier concession speech – which began with a joking, "We're in the run-off!" – turned quickly reflective, and full of thoughts about what it means to live in Austin. It was full of quotable moments, but we'll end with hers to her fellow candidates, and the whole city: "Don't run away from diversity. Don't just give it lip service. Embrace it. And Austin will do just fine."