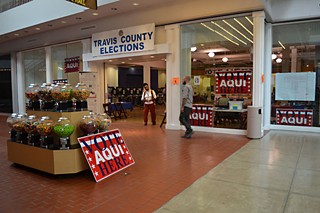 City Council next meets Nov. 6 – an ominous two days after an election that will shuffle the members – with a return to CodeNEXT, the long-awaited "coyote management plan," and a remodeled City Hall. See "Council," Oct. 31, 2014.

Mayor Lee Leffingwell endorsed Steve Adler as his successor Monday, saying Adler has the "gravitas, demeanor, experience, and leadership ability" to make a great mayor – and leaving his Council colleagues Sheryl Cole and Mike Martinez to fend for themselves. Expect friction in chambers and on the dais.

Corey Mitchell, co-founder of the Housecore Horror Film Festival, died on Monday after the second annual festival. A mainstay of Austin's metal scene since the Eighties, and a true-crime author, his sudden death at the age of 47 left the local film and music communities stunned (see "Playback," Oct. 31, 2014).

APD Police Chief Art Acevedo dropped the disciplinary hammer last week, indefinitely suspending (i.e., terminating) Lt. Jason Disher. The 15-year APD veteran was banished for withholding information on an official statement that detailed interactions he had with the husband of a woman he'd been canoodling with extramaritally. Disher was charged with dishonesty and retaliating.

Big money at the Circuit of the Americas. The Austin race track released a report this week that, between F1, the X Games, other races across the year, and the big outdoor concerts it has hosted, it was responsible for $900 million in economic activity over the last year, with 1.1 million visitors.

Jon Stewart and company are in town this week to shoot The Daily Show at Zach Theatre, and it's the hottest political ticket in town – Monday's guests included none other than Dem gubernatorial candidate, Sen. Wendy Davis.

Last weekend, Davis hosted a get-out-the-vote rally in Pflugerville, where she slammed GOP opponent Attorney General Greg Abbott for defending $5 billion in education budget cuts – the focus of her latest campaign ad – and reflected on the "humbling" experience of voting for herself.

Turns out Republican state officials knew Texas' voter ID law would disenfranchise more than 500,000 registered voters while they were pushing for the bill in 2011, but failed to share the information with other legislators, according to the Texas Tribune. Oversight or willful omission?