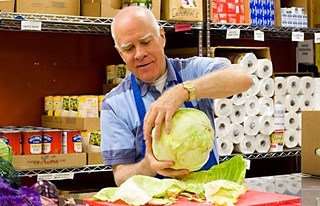 A local light has grown dim. Twenty-five-year veteran of AIDS Services of Austin – and during that time, regular Chronicle contributor of the "About AIDS" column – John "Sandy" Bartlett passed away in late August. A memorial service will be held in his honor, Sunday, Oct. 26.

Considered an integral member of Austin's AIDS outreach and education for nearly three decades, Bartlett dedicated his life to softening the brunt of HIV/AIDS on the lives of those most affected, as well as engaging the community at large with clarity and care at a time rampant with hysteria and misinformation. In 1988 – the same year Congress passed the Health Omnibus Programs Extension (HOPE) Act, paving the way to improving public access to critical info in the fight against HIV/AIDS – Bartlett's trailblazing began. In February of that year, he accepted a position at the newly formed AIDS Services of Austin. As volunteer coordinator, he recruited and trained thousands of volunteers for ASA's Helping Hands Food Bank; jumping between volunteer services and educational outreach, Bartlett greatly expanded Austin's public health education.

"His longevity was a testament to his dedication and determination, which stemmed from what drew him to ASA originally: AIDS was decimating his community. HIV/AIDS became his life's work," wrote Lee Manford, in ASA's online tribute. Aside from his work at ASA, Bartlett produced The AIDS Primer: A Training Manual, an HIV/AIDS resource that health workers still use. Around the same time, Bartlett found a weekly public forum for this work: his "About AIDS" Chronicle column.

In October, 1989, AIDS panic fueled a particularly strange chapter in the history of this paper. Local pastor and conservative activist with the American Family Association Mark Weaver campaigned to have the Chronicle removed from local H-E-Bs, citing the paper's M4M personals section in the back as not-family-friendly. This earned Weaver a spot as the subject of the paper's annual spooky Halloween Mask cover (a tradition that continues next week). The campaign was initially successful; H-E-B pulled the paper briefly from 17 Austin stores. But an amazing thing happened: Chronicle readers responded with a boycott that got the papers reinstated in the grocery chain.

"During this ordeal," says editor Louis Black, "Nick [publisher Nick Barbaro] and I talked and realized that the Chronicle should not just carry gay-friendly personal ads but actually reach out to the AIDS community to offer ongoing support. And we reached out to that community. Sandy responded."

In the issue (Nov. 3, 1989) that marked the Chronicle's return to H-E-B, a weekly column called "About AIDS" appeared on page 37 (in those days, the classified ad section). While a number of community volunteers contributed to the small back-of-the-book feature over its run from 1989-2005, "Sandy really took over, drove, and authored that column," says Black. "In many ways he provided not just information but an anchor for a range of organizations." Bartlett became both a voice and an expert in the fight against the spread of AIDS and HIV (and the misunderstandings about them) often speaking on local radio and television, and lecturing at local colleges.

Though he retired from ASA in 2012, Bart­lett never lost his fighting spirit, or his seemingly endless empathy. He leaves a permanent memory of his fight against an epidemic and the hate-filled paranoia it spawned. "If a person's life is measured by the enrichment he gives to the lives of others, Sandy set a world record," wrote ASA volunteers Linda Magee and Tom Wilmore. "He inspired us all along the way."

Memorial Service for John "Sandy" Bartlett, Sunday, Oct. 26, 2pm, at Trinity Methodist Church, 4001 Speedway. All are welcome to attend. For further info, updates, and tributes (share a memory and leave your own), see www.asaustin.org/sandy.

Social Studies
The Austin Men's Project turns three -- and says goodbye to one of its original coordinators. 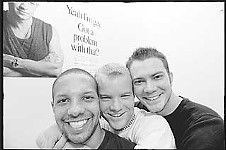