Appeals denied for Paredes and two others 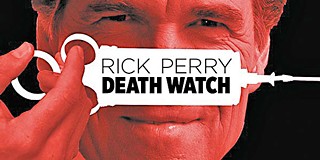 Ultimately, it mattered not whom Miguel Paredes killed but rather if his trial jury could determine that he assisted in or enforced the deaths of two of three individuals who lost their lives in September 2000. Paredes was only 18 at the time and affiliated with San Antonio's Hermanos de Pistoleros Latinos. His boss, John Saenz, had gotten mixed up in a bad drug deal with Adrian Torres, gang leader of SA's Mexican Mafia. Saenz brought Torres to his house one Sunday afternoon while Paredes and an accomplice, Greg Alvarado, were waiting respectively in the garage and an adjacent bedroom.

Torres didn't leave alive; neither did Shawn Cain and Nelly Bravo, who rode with Torres to Saenz's house. Paredes and Alvarado came out of their respective hiding spaces after the Mafia members entered; with Saenz, they shot and killed all three visitors. Their bodies were found a few days later in Frio County, southwest of San Antonio, where they'd been bound and burned and left by Paredes and other Pistoleros. All involved parties were arrested two days later, Sept. 19, 2000, except for Alvarado, who was caught several days later.

Testimonies from Saenz's neighbor as well as his brother Eric, a member of the Pistoleros who doubled as an informant for the San Antonio office of the U.S. Bureau of Alcohol, Tobacco, and Firearms, linked Paredes to the murders. Eric's testimony, which detailed both onsite realizations after the shootings, as well as information gleaned from a conversation he had with his brother, revealed Paredes to have said that Eric "should have been there, that I would have had some fun." He further testified against Paredes by saying the 18-year-old, known as "Fat Boy" within HPL circles, "didn't look like [the murders] fazed him," while John "looked like he was not in his right mind" during the period of time in which gang members rid Saenz's house of the bodies.

Paredes was found guilty of capital murder and, after being painted as a young gang member with an already established history of crime violence (including murder, kidnapping, and the burning of a woman's body after she'd overdosed on drugs), sentenced to death on Nov. 9, 2001. His primary accomplices – Alvarado, who pleaded guilty, and Saenz, who claimed self-defense – were both handed life sentences.

In November 2003, Paredes began a series of applications for habeas corpus relief that largely hung on five grounds. Beginning with a state effort and concluding with a federal appeal, he argued that he'd been made subject to a grand jury that, at 8% His­pan­ic, wasn't "a fair cross section" of the community (at the time, Bexar County was 34% Hispanic); that he received ineffective trial counsel; that the trial court erred in allowing the jury to conclude that Paredes killed or intended to kill any two of the three victims (and not specifically pin two exact murders on him); that the Texas capital sentencing statute is "arbitrary and capricious and violates the Eighth Amendment because it contains vague and undefined terms for aggravating factors"; and that the trial judge "uncritically and unconditionally accepted the prosecutor's findings without any judicial guidance."

Each effort for relief was eventually denied. Some – such as Paredes' claims against proper representation on the jury and against the effectiveness of his trial counsel – were procedurally barred from review. An Aug. 2010 appeal to the 5th U.S. Circuit Court of Appeals was refused on many of the same grounds. Five months later, in January 2011, the U.S. Supreme Court refused Paredes' writ of certiorari.

Paredes is set to be executed on Tuesday, Oct. 28. He'll be the 11th inmate executed this year, and 519th since the reinstatement of Texas' death penalty in 1976.

Earlier this month in unrelated cases, the U.S. Supreme Court refused an appeal from 32-year-old Derrick Dewayne Charles, a Houston native who'd been sentenced to death in 2003 after being found guilty of strangling his 15-year-old girlfriend Myiesha Bennett, raping and strangling her 44-year-old mother Brenda Bennett, and fatally beating his girlfriend's 77-year-old grandfather Obie Lee Bennett. And last Tuesday, the 5th Circuit refused an appeal from Raphael Holiday, convicted of killing his 18-month-old daughter and her two half-sisters when he set their Madison County house on fire in September 2000. Neither of the two have yet to receive their execution dates.