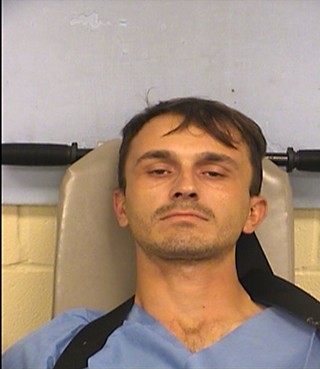 Austin's 17th murder of 2014 was an unusual one. Last Monday, Oct. 6, about 9pm, some vigilante action went down that left a 25-year-old black man, Dwayne Guidry, strangled to death in South Austin.

The accused killer – a white man, 32-year-old Joseph Mobley – initially noticed Guidry in the parking lot of a Domino's Pizza on Manchaca Road, just off Slaughter Lane. He was sitting in his own car with his family when he saw Guidry jump into a silver Ford Mustang with the engine running; according to the Austin Police Department affidavit, seconds later, a delivery driver ran out of the shop shouting that his car was being stolen. Mobley drove out of the lot in pursuit of Guidry, eventually blocking him, with his own car, from exiting a subdivision further south on Manchaca.

Both Guidry and Mobley reportedly left their vehicles after Guidry, in an attempt to escape, drove the Mustang into the Mobley family's car. Mobley asked one of his sons to hand him a hammer; from there, Guidry fled on foot and Mobley pursued him.

Mobley told police he caught Guidry and hit him in the back of the head with a hammer. The two wrestled; Guidry knocked the hammer away from Mobley's hand (it was found nearby), and Mobley put his victim in a choke hold. His form was "the right way," Mobley would later explain to police. When the police arrived, Mobley was standing over Guidry holding Guidry's hands behind his back. Says the affidavit: "He [Mobley] was taught that 'when they wake up they will attack you.'"

Guidry was taken to University Medical Center Brackenridge and pronounced dead at 9:50pm. An autopsy conducted the following day ruled the manner of death a homicide, due to asphyxiation. Dr. Satish Chundru, the Travis County medical examiner, also noted two separate injuries to the back of Guidry's head.

Mobley was sent to South Austin Hospital to receive treatment for a swollen hand. He was arrested and charged with voluntary manslaughter, a second degree felony. According to jail records, Mobley is currently being held on $60,000 bond.

Mobley is due in court next Friday, Oct. 24, and won't just stand in defense of the manslaughter charge. He's facing two burglary charges from when he was arrested for breaking into two apartments in August of 2014. Guidry also had a record – he'd been arrested in Williamson County four times over the past five years, including a charge of driving under the influence as a minor in 2009, a marijuana misdemeanor in 2011, and burglary of habitation last July.