Our endorsement for Local Prop. 1 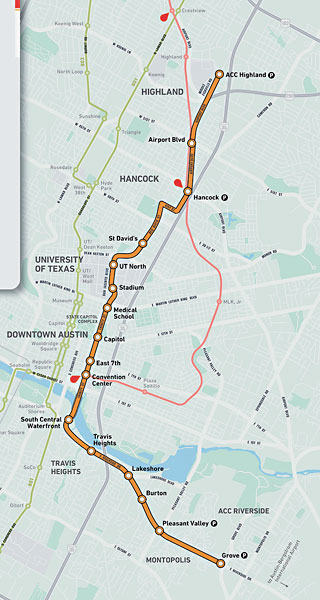 We're not unanimous on the city's transportation bond – $600 million for rail conditional on both federal matching funds and City Council approval and $400 million in necessary regional roadway projects – but on balance, most of us believe that the next important step to Austin's multimodal transportation future is to get started now on a rail system that will slowly but steadily encompass the whole city and link to inter-regional lines (including the growing Red Line). We're aware of the ongoing debates over the route chosen and the city's planning process, and some of us argue that the former is wrong and the latter has been bungled. Others object to the cost, but the most prosperous region in the state can certainly afford to do what other Texas cities have already accomplished. Any initial route, in Austin's hurly-burly politics, would have been questioned, and this one (as described in the proposition) would begin to link southern and northern areas of the central city, would cross the lake (a large initial expense), through Downtown and the Capitol area, and would encompass already planned development along both the UT Medical School complex and the Austin Community College Highland campus. We believe it's a good first line that responds to the city's projected growth; we also believe it's a potentially fatal mistake to wait for a perfect consensus (which is never possible, anyway). The hardest-core opposition supports only highways, and won't change; add those who believe the next, quick-start plan will inevitably be better and more politically viable, and we understand the vote may be iffy. But there is, in fact, broad-based support now, from many local progressive organizations, to finally get moving on a networked city rail system – to build toward Austin's future – and we agree.