APD: Can We Please Buy Some Top-Secret "StingRays"?

Is APD trying to track your phone? 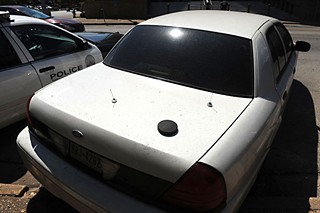 A possible IMSI catcher sits atop an unmarked car. (photo by John Anderson)

Raising concerns about both government surveillance and public transparency, responsive documents from a recent Chron­icle open records request to the Austin Police Department reveal the acquisition of phone-tracking devices by the Texas Department of Public Safety that require a nondisclosure agreement with the U.S. Department of Justice and the manufacturer of the devices, Harris Corporation. The documents also reflect efforts (apparently unsuccessful, thus far) by the APD to purchase the same equipment.

The documents, a series of emails, include one dated June 4, 2014 by agent Jason Ernst with the DPS Electronic Sur­veillance Unit; Ernst acknowledges that he signed a nondisclosure agreement regarding the devices. According to Matt Simp­son, policy strategist with ACLU of Texas, a nondisclosure agreement "adds another layer of poor transparency," regarding the use of this surveillance equipment by local law enforcement. Although there are provisions in the Texas Public Information Act which allow sensitive law enforcement information to be exempt from disclosure, Simpson explained, a nondisclosure agreement can hide what could be legitimate public information, eroding the ability of citizens to hold government accountable. Without knowing more about the devices, it becomes difficult to determine if their use is constitutional or even cost-effective.

Addressing what have become known as "IMSI catchers" (i.e., "International Mobile Subscriber Identities" for mobile phones), or by the Harris brand name, "StingRays," the emails reflect efforts to buy the surveillance equipment, in emails sent by APD Firearms Review Unit Detective Will Mer­ca­do. Although the emails even mention a training session that took place, they do not contain evidence of an actual APD purchase. According to APD Public Informa­tion Officer Veneza Bremner, the department "has not bought tracking devices from Harris Corp.," although there was an Oct. 1 meeting between APD and Ray Rhein­gans, a Harris representative who describes himself as APD's "point of contact for Harris." APD has confirmed the meeting took place, but declined to provide more detail.

The devices themselves are not new, but have become more controversial with their proliferation. Although their use is legal when used with a search warrant, according to Christopher Soghoian, principal tech­nologist with the ACLU's Speech, Privacy, and Technology Project, the equipment basically functions like a cell phone tower, sending signals to all phones within its reach and capability. Despite contrary claims by the FBI, "there's no way these devices can avoid innocent people," explained Soghoian, because they indiscriminately "send signals into people's houses" just as a cell phone tower would. And by requiring nondisclosure agreements – not only with the DOJ, but with a private company – it's "really surveillance through the back door," Soghoian added.

The emails show that Detective Mercado began a search for phone-tracking equipment in May of 2014, first contacting DPS agent Ernst – although Mercado was repeatedly stymied in finding out more by the very nondisclosure agreements that govern the devices. After providing Mercado with a document that outlined a grant program offered by Harris Corporation in conjunction with the Department of Justice, Ernst responded that he "discussed this with my Captain and told him you guys are looking into setting up your own gear. Unfortunately he reminded me of the NDA (None [sic] Disclosure Agreement) that I signed with our department and the Department of Justice, sorry."

DPS Public Information Officer Tom Vinger would not comment on the emails or the agency's NDA, but advised that questions be submitted as an open records request. The Chronicle has since received a response from DPS stating they will be "withholding these materials at this time to afford the FBI an opportunity to assert that these records are excepted from disclosure pursuant" to certain sections of the Public Information Act.

Several emails indicate Mercado was assisted by APD Detective Joanna Candoli. After the failed attempt with DPS and another with the Houston Police Depart­ment, Candoli wrote Mercado in an email dated July 8, 2014: "I asked around and I don't think any agency with equipment can talk about what they have, they just refer you back to the Harris company."

On July 24, Harris representative Rhein­gans contacted Mercado with a follow-up email after a phone call between the two. Rheingans provided a website link which would get APD started on the process. Addressing the potential cost, Rheingans suggests using "450k as a reference point." But Harris offers a grant program – drawing down federal funding – that can offset much of the cost to local law enforcement, presumably making the purchase even more attractive to APD.

Setting aside whether such devices can be useful in specific, targeted police investigations – that is, searches lawfully subject to judicial warrants – hiding the transactions or the devices themselves under federally enforced secrecy would only make it harder for a court to determine if such searches were carried out legally, or instead were collecting massive amounts of user data from innocent bystanders. And there's a particular irony in the fact that APD might know more about the "StingRays" – if only the police agencies already buying them were permitted to talk about them.

Email Correspondence Between APD and DPS and Related Documents