ACC Propositions and Board of Trustees

The following endorsements initially addressed only the ACC bond propositions (numbered 1 and 2), plus a proposal to raise the maintenance-and-operation tax rate, beginning in 2016.

It is now updated to included our recommendations for the two college trustee seats – Districts 1 and 2. Early voting starts on Oct. 20 and runs through Oct. 31.

While "affordability" is the reflexive, often unexamined mantra of the current local election cycle, Austin Community College is a pivotal – yet currently underfunded – piece of the regional educational equation, where "affordability" must mean equipping students to support their families as well as to contribute to the local economy. The college has two bond proposals: Prop. 1 contains $225 million to complete the Highland Campus conversion (plus a new campus in Leander and cash to buy land for a Southeast Travis regional workforce center); Prop. 2 asks for $162 million for renovations and growth across ACC's existing campuses. In a slightly compressed summary, Prop. 1 means completing High­land, while Prop. 2 is about fixing leaky roofs and adding needed infrastructure. Combined, the two props would mean a maximum tax increase of two cents per $100 of property value.

The "Tax Cap Increase" proposition would mean a long-term, three-cent increase in ACC's taxing authority – but phased in over six years, beginning in 2016 with a cent every two years, to 2020. ACC's tax rate, currently at 9.5 cents per $100 – is on the low end of Texas community colleges (the average is 16 cents), and has put unnecessary pressure on the district to raise tuition and fees – when the relationship should be reversed. Over the six years of its implementation, this incremental increase would bring the college's main­ten­ance-and-opera­tions rate to 12 cents and the overall rate to 15.5 cents, or just below the current 2014 average. The slowly implemented increase is dearly needed for the school's M&O budget, and among many other needs – stabilizing student costs, expanding veterans' programs, early college start, etc. – it will also help boost still-paltry faculty salaries, even allowing the hiring of more full-time faculty. This is simply an overdue and necessary investment in Austin-area students and their ongoing education. 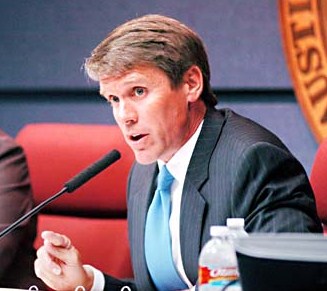 In a two-horse race, it's usually easy to pick a winner. But between incumbent Tim Mahoney and his challenger, former Austin ISD board president Mark Williams, we nearly reached an impasse. Mahoney has been a powerful advocate for both staff and students, strong on labor rights, and prepared to take on the administration and its intentions for the fast-growing but sometimes ill-managed district. But on more than one occasion, his challenges have become Quixotic windmill-tilting. Even Mahoney’s allies say he’s hard to work with – so that even when he’s right, he’s often ineffective. Williams, on the other hand, was rightly criticized for giving the Greater Austin Chamber of Commerce too much say over AISD matters, and letting former Superintendent Meria Carstarphen run roughshod over public engagement. But ACC is not a public school district – a core college purpose is workforce development – and a close connection to the business community may be exactly what is needed for this post. Both men are knowledgable and committed to education, and with only two candidates, a “no endorsement” seems feckless and ill-advised. We applaud Mahoney for his service, and recommend a vote for Williams. Among six candidates, two have emerged as the most serious and viable. Bryant is a long-time member of ACC's superstructure, serving on its Foundation board, and has a clear institutional advantage. There is no learning curve for Bryant, and she already has clear ideas about specific programs that could be revamped to help students and staff; she would even be able to remain on the fundraising Foundation board. By contrast, contractor and workforce training advocate Chang Sheppard has exactly the fresh eyes that the district needs, especially as it moves forward with years of expensive construction, which is her professional territory. That a member of the business community has swept the labor endorsements is very telling, and Chang Sheppard promises to hold the college’s infrastructure projects to high construction and labor standards. Both candidates are ACC alumni, and have specific visions of how to integrate ACC into the region's education network; either provides a strong option for the voters, and for ACC.