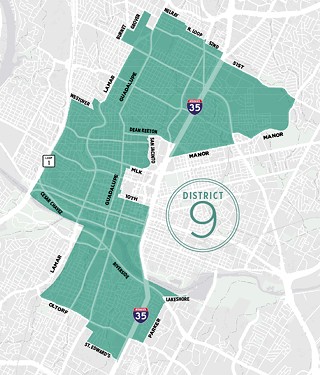 District 9: Heartbeat of the City


District 9's standing as the centermost district of Austin's looming 10-1 City Council – and arguably the traditional center of city power – means that one of these candidates will preside over a district that encompasses historic homes and college kids, and has a median household annual income of $82,000, yet a poverty rate that hovers around 35% – thanks, in part, to that same big crew of college students.

Spanning from 51st Street up north to Oltorf down south, and including the new Mueller development, most of Windsor Park, and parts of Cherrywood to the east, the 12-square-mile space encompasses the central business district as well as some of the city's wealthiest, most established neighborhoods. It's 66.8% white (17.2% His­panic, 3.5% African-American, and 9.9% Asian), includes only 30% homeowners, and is as young as it is influential – an intriguing combination of venerable authority and youthful energy. More than 43% of the population is between the ages of 18 and 24.

Each candidate has waged a campaign based on varying prospects of growth and transportation, while also addressing incentives for incoming businesses. The incumbents' tenures on Council have reflected polar opposites on urban development matters: Tovo is a resolute supporter of traditional neighborhoods centered on schools and existing small businesses, while Riley, citing both environmental and affordability reasons, has steadfastly promoted increased residential density. The Downtown population has more than doubled over the past decade (from 4,000 to 10,000) – and is likely to double again in the next. How Council intends to house newcomers, and the infrastructure to support that growth, remain at the top of central-city agendas.

Central-city roads are already at capacity, and accessible parking – or alternatives to parking – have become priority issues. Both incumbents support Prop. 1, the rail-and-roads bond package, with rail's initial segment through the middle of District 9, although thus far that puts them in the minority of 10-1 candidates, among whom Prop. 1's potential price tag has overwhelmed all other arguments. Riley's been at the forefront of resolving the ongoing debate in favor of transportation network companies like Uber and Lyft – very popular in the youthful constituency supporting him. If the city can design an effective regulatory plan, not only would the TNCs get more drunk drivers off the roads at closing time, but it could also help address the city center's growing parking and overcrowding issues.

Austin's growth has brought a wealth of new businesses, with expectations that both expansions and relocations will continue. As businesses increasingly locate Down­town, D9 will sit under the microscope examining corporate incentives: Tovo has argued strongly against continuing the city's current incentive policy as having become unnecessary, and criticized Riley for voting in favor of what she considers unrestrained growth. Riley argues that attempting to stop dense inner-city development both drives up housing prices and encourages suburban sprawl; he has supported the city's current incentives policy, while noting that it has steadily evolved in response to changing conditions. McGann, who has said she wants to "infuse common sense into growth," largely opposes economic incentives to new businesses.

It's possible that whoever survives the D9 race will be the sole returning member of the current Council (at most, one of two), meaning that he or she will be the Old Hand attempting to bring continuity to an otherwise all-new official landscape. For D9 and its central-city residents, that will at a minimum mean that most council members will focus largely on their own districts, and be unlikely to defer reflexively to the priorities of the Downtown business district or its rapidly growing residential population.

Yet Downtown remains the economic engine of the whole city: not just in taxable property value, but as the cultural and demographic heartbeat for much of Austin's local, national, and international identity. How the new Council handles that dynamic energy, across newly created district borders, may well depend on the political instincts and capacities of the first District 9 council member.