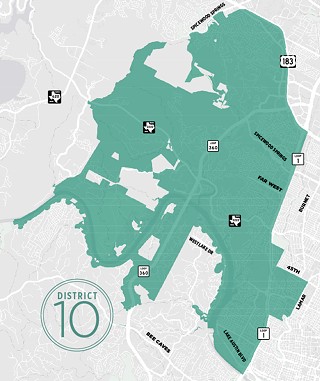 
District 10's borders are MoPac to the east (although crossing the highway to encompass the Rosedale neighborhood); U.S. 183 to the north; the tiny, affluent city of West Lake Hills to the south; and District 6 to the west.

From the west and northwest of Central Austin, the concerns of District 10 are very different from those of, say, District 1. D10 has the highest percentage of white residents (78.3%), and the lowest percentage of black (1.7%) and Hispanic (9.3%) residents. It also boasts highest percentage of registered voters (more than 60%) and, typically, the highest voter turnout (nearly 60% in 2012). It's also the wealthiest district, with a $128,000 median yearly family income (for comparison, D8, the second-wealthiest, has a median income of $109,000, and D3, the poorest district, has a median income of $35,000). In this context, both D10 voters – and donors – are accustomed to being aggressively courted during election season, including for City Council.

However, here as elsewhere, "affordability" – a word with so many definitions in Austin as to be nearly meaningless – remains a high-profile issue. As in other districts with high homeownership (over 55% of residents are homeowners) and income, D10 residents want to see property tax relief in the form of a homestead exemption. When asked how the city would be able to afford a homestead exemption that, by state law, must be in the form of a percentage (giving the largest break to the wealthiest), candidate Mandy Dealey said that a phased-in exemption would allow taxes to stay flat while property values rise, and that the city's seemingly unstoppable growth would provide the missing revenue.

Another concern is wildfire preparedness. The dramatic, verdant hills are undoubtedly a great part of the district's attraction for wealthy homebuyers, but they also represent a significant fire risk. All eight of the district candidates cite this as a priority, with most focusing on prevention through greater use and organization of existing resources – especially since the 2011 Bastrop fires, the Austin Fire Depart­ment and Council have been working on ways to amplify fire protection and avoid a disaster.

With Highway 183 and MoPac bordering the district, and both 360 and 2222 bisecting it, traffic is naturally a source of district aggravation. Of the candidates, only Dealey supports Prop. 1, and even she doesn't see rail as a solution within her district – she believes the hills make it untenable. As alternative solutions, district candidates have variously touted expanded bus service and Park & Rides, legalization of transportation network companies, better signal-timing, toll lanes, and additional highway construction.

Politically, D10 leans very slightly to the left, but it's a swing district. The current Council candidates run the gamut from Bill Worsham, endorsed by the Austin Texas Tea Party, to Dems Dealey, Tina Cannon, and Jason Meeker, the last of whom made his name locally fighting the development of the Northcross Wal-Mart (in what is now District 7). The second round of campaign finance reports are due Oct. 6. It will be interesting to see where the candidates now stand – in the first (July) fundraising reports, Dealey and Republican Robert Thom­as each raised about $50,000, but Thomas augmented his funds with a $100,000 self-loan. That raised eyebrows in a 10-1 election supposedly devolving to "grassroots" candidates – in District 10, the grassroots are doubly green.