Point Austin: Future in the Balance

I have to admit I was surprised last week when I was handed initial poll numbers by the Let's Go Austin folks, indicating that their mid-September survey on the Novem­ber transportation bond – local bond Proposition 1, for rail and road projects – garnered 52% support for the proposition, to 43% opposed. The margin of error (+/-4.4%) is enough to collapse those numbers into a virtual tie, but according to the pollsters (Greenberg Quinlan Ros­ner Research), the survey reflects a citywide sample of 500 likely voters, and support among "progressives" (69%) and Dem­ocrats (61%) was sufficient to override opposition from Republicans and independents. "That doesn't mean we're going to win," said Let's Go consultant David Butts. "But we're competitive, and this poll shows that with a good campaign, we can win."

I'm not immediately persuaded. As I said, I was surprised, because I've heard enough street-side opposition to Prop. 1, especially at City Council candidate forums, to at least suspect that the initial numbers should have fallen the opposite way. The three major mayoral candidates – Steve Adler, Sheryl Cole, and Mike Mar­tinez – have all endorsed Prop. 1 (Adler somewhat grudgingly), but the rest of that field and the large majority of Council candidates oppose it, many strenuously. That's not too surprising, since 10-1 restructuring has inevitably brought out candidates most passionately opposed to current city policies, but Prop. 1 supporters might also have worked harder either to find their own candidates, or to at least make their case to those already running.

That clearly hasn't happened, and there may not be enough time left to make the case to the voters at large.

Let's Go Austin campaign manager Lynda Rife points to the dozens of organizations and elected officials supporting Prop. 1 (and presumably the likely District 9 winner, Chris Riley or Kathie Tovo, will give the future mayor one more ally), and argues, "The people that are actually reading and looking and understand the proposal, the ones who are taking the time to do it are supporting us." The poll-takers presented the full bond proposal – $400 million in road projects in combination with $600 million on rail, the latter dependent on federal matching funds – and Rife said that seems to make the difference for people who otherwise were unaware of the details.

She also said that beneath the front-page numbers, younger voters and more recent Austin arrivals are more likely to support Prop. 1 than older, more established Aus­tin­ites, and the task of the campaign is to expand that base and bring out those voters. Asked about the voluble "transit advocates" who are adamantly opposed to this plan, Rife was blunt. "It's easy to sit and throw rocks at a plan that's here. It's easy to say, 'I like the plan that I've come up in my head with. Now, granted, I've never done any rail projects, but this is a way better plan.' ... Even if you're a rail advocate, that doesn't mean you're a rail expert."

That salvo seems mostly aimed at AURA, the "urbanist" advocates who have allied with Our Rail and others to oppose Prop. 1. AURA recently blasted Let's Go Austin for an ad they consider misleading, and more generally is now arguing that Prop. 1, specifically the rail project, would be "worse than nothing," because it would divert resources from more effective projects. "The city's proposal to spend $1 billion doubling down on highways and highway-oriented urban rail is worse than doing nothing," said AURA's Marcus Denton in a press release. "By burdening the city with an expensive-to-operate yet poorly located line, Proposition 1 would be a huge setback for walkable urbanism in Austin."

The opposition I've been hearing from candidates on the stump is hardly that nuanced: Prop. 1 "costs too much," it will "raise property taxes," it "doesn't serve this district" (who knew that balkanization would arrive so quickly?), "we need roads not rail," and that's pretty much the end of it. Should Prop. 1 indeed pass, it would be amusing to watch an anti-rail Council try to implement (or scuttle) projects they had just campaigned against.

But more inspiring would be an October campaign by Mayor Lee Leffingwell, the current Council, and the much larger Let's Go Austin coalition that 1) succeeds in truly educating voters on the details of the bond, and 2) persuades a sufficient number of these opponents that what might not immediately serve their districts would still be a step forward for the whole community, especially its future quality of life.

After the 2000 light rail plan was defeated, it set Austin back 14 years, during which time the cost more than doubled. It would be short-sighted indeed to take the same action, and expect a different result. 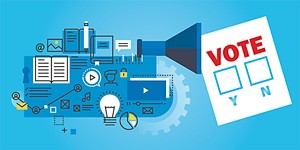 Bondology
How does one schedule a bond? Very carefully, and with a lot of advance planning.