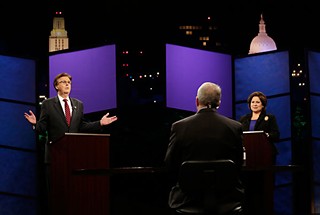 FIRST WEEKEND of the Austin City Limits Festival begins tomorrow, Oct. 3, featuring OutKast, Beck, Paolo Nutini, the Night Terrors of 1927 ... and Asleep at the Wheel. Be there or be square.

EBOLA ARRIVES in the U.S., via a Dallas hospital patient recently returned from Liberia, who tested positive for the virus after exhibiting symptoms several days after arrival. The patient and others in contact with him have been quarantined, and the virus is not expected to spread.

THE FIRST PRETRIAL hearing for former APD Detective Charles Kleinert has been pushed back for the fourth time – it's now scheduled for Nov. 12. Kleinert is charged with manslaughter for the July 2013 shooting of Larry Jackson Jr.

SXSW CANCELED! is not a headline likely to appear anytime soon, but a consultant's report released Wednesday makes clear that the city and SXSW need to collaborate on safety, capacity, infrastructure, and long-term planning. SXSW head Roland Swenson said the report "lays out the vision to improve and protect one of Austin's crown jewels."

AUSTIN LAWYER Larry Sauer is suing Gov. Rick Perry and Comptroller Susan Combs in an attempt to prevent the governor from continuing to use taxpayer money to pay his criminal lawyers. "State law is clear that public officials cannot use taxpayer or other state funds to defend a criminal charge, unless and until the official has been found not guilty," states the lawsuit.

NEED MONEY? Drop a line to the Texas Enterprise Fund – an audit revealed that the TEF handed out more than $220 million, or nearly half of its funding, to companies that neither filed formal applications nor documented any new job creation – the legal purpose of the fund.

ATTORNEYS GENERAL from 15 states and D.C. filed a brief on Sept. 29 on behalf of the Texas couple fighting Texas' marriage equality ban. The AGs claim their jurisdictions have "seen only benefits from marriage equality." A district judge ruled Texas' ban unconstitutional in February; the state's appeal is pending before the 5th Circuit.

STATE SEN. Ken Paxton, GOP nominee for Texas attorney general, can breathe a bit easier: The Public Integrity Unit won't proceed with its criminal investigation of him until after the election. Paxton was reprimanded and fined by the State Securities Board in May for violating the Texas Securities Act; the PIU will determine whether he should also be charged with a felony.

NFL COMMISSIONER Roger Goodell, in trying to quiet criticism about the NFL's attitude toward domestic violence, visited Austin this past weekend, meeting with Longhorn coach Charlie Strong, and touring the National Domestic Violence Hotline offices in West Lake Hills. The NFL has pledged to make a "multiyear, multimillion dollar" commitment to the hotline.