Uber and Lyft push their way to a resolution 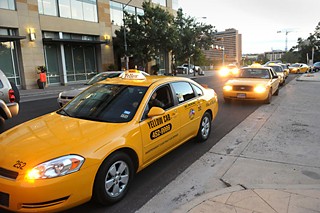 When it comes to redefining the local transportation industry, it appears that strong-arm tactics can be rewarded.

The first step – Council's approval of a slightly modified first reading of Council Member Chris Riley's proposed ordinance to allow transportation network companies to start running on an interim basis – took place Thursday night/Friday morning, at the conclusion of another marathon Council session. Members deliberated on the proposal for almost four hours, as ordinance sponsor Riley repeatedly rejected would-be "friendly" amendments from colleague (and District 9 opponent), CM Kathie Tovo – and others on the dais expressly left the door open to change their minds upon subsequent readings. Ultimately, Council voted 6-1 in favor of approving the resolution (CM Laura Morrison dissented) – if eventually enacted, it would define TNCs and allow those companies which abide by a long list of stipulations to sign operating contracts with the city manager, and to begin offering Austinites paid rides – at last legally.

Riley, Tovo, Morrison, and company convene again today, Thursday, Oct. 2, and Riley's office is hoping to pass both second and third readings of the resolution. Expect another late night, a second slew of proposed amendments, and just as much of a presence from advocates on both sides.

During the week between meetings, Riley's staff has been working to strengthen the language covering proposed reporting regulations for service to disabled riders. Policy aide Leah Bojo said it's less important for the city to regulate the way in which TNCs provide disability service than it is to see evidence that improvement is happening, and that an increase in disabled Austinites getting timely rides should be most important. Bojo also said that efforts are being made to rework the language in accordance with an 11th-hour agreement to adjust the duration of temporary contracts from one year to a term based on the eventual proposal for a pilot program a task force is expected to recommend in November. In fact, the initiative's relationship with that task force was an open question, as some wondered aloud why Riley, who initially proposed a 90-day return (later extended to 180) on that task force's recommendation, would now try to circumvent his own proposal.

Meanwhile, Uber has focused its own efforts on better assessing how the company can serve the city. (Lyft representatives did not make themselves available to the Chronicle.) On Tuesday morning, Uber General Manager Chris Nakutis retreated from spokesperson Jennifer Mul­lin's previous hard line against data sharing (see "A New Deal for TNCs?" Sept. 19), suggesting instead that the company could see fit to work with the city to better solve Austin's persistent problem with drinking and driving. "Looking at cities like Seattle and Philadelphia with the 10% decreases [in DUIs]," he said, pointing to two studies, one by a Pittsburgh data coder and another conducted internally. "I'm pretty sure that when you look at the data over the next 12 months, if City Council passes this ordinance as is, we'll be able to see a 10% reduction in DUI rates associated with Uber and Lyft entering the market. I'd be open to sharing that data with the city in the form of however that takes shape." Nakutis also mentioned his company's interest in improving citywide congestion, though he didn't offer any specifics concerning how Uber may help make that possible.

The company's newfound willingness to work with the city represents a victory for Riley and other advocates supporting the legalization of TNCs. The companies' recent actions, in Austin and around the country, have made it clear that if Riley's proposal fails, Uber and Lyft have no intention of ceasing local operations. "We're so minutely focused on consumers and Austinites," Nakutis said when asked about the potential for halted operations. "We know that TNCs provide additional transportation options, decrease DUIs, and help people better understand their city."

Whether Nakutis' language concerning Uber's focus on consumers is sincere or a polite translation of "this company's making a ton of money" is less important than the reality that these companies will best serve their own missions by continuing operations – legally or otherwise – in Austin. Public scorn from cabdrivers and a few Council members and a four-month accumulation of operating citations – which both Uber and Lyft have been cheerfully paying for their subcontracting drivers – has done nothing to change that impression.

Both companies have successfully strong-armed themselves into the transportation framework of the city; Council appears to believe it's become necessary to get them, at least to some extent, on the legal side of the street.