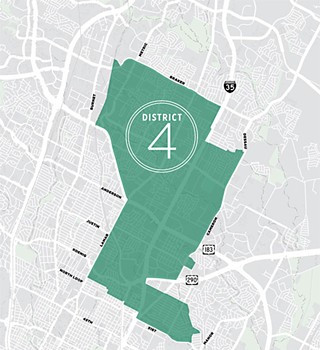 District 4: A Sense of Place

On the stump, District 4 candidates routinely describe the district as the "most compact" of the 10, and indeed it's slightly smaller than the second smallest, D9 to the south – both inner-city districts, yet very different in demographics. Running from 51st Street and Koenig Lane on its south end, the district straddles I-35 northward, all the way to Braker Lane. At 65% Hispanic/Latino in the 2010 census, it was drawn as the third of the Hispanic opportunity districts (2, 3, 4), and it also outstrips the others in population density – although its growth rate was much lower than the others over that first decade.

More strikingly, D4 had by far the highest percentage (nearly 35%) of noncitizen residents, the lowest percentage of homeowners (25%), and the lowest number of registered voters (about 27,000). The latter factor may have led to one of the simmering campaign issues: Several of the eight candidates (Greg Casar, Monica Guzmán, Marco Mancillas, Laura Pressley) moved within D4 boundaries relatively recently, and their opponents suspect they were shopping for a district requiring the least amount of legwork.

Yet the district also represents a compact version of another 10-1 question: When candidates routinely proclaim that someone "from the neighborhood" will represent them, just which "neighborhoods" in the 80,000-resident districts do they mean? For D4, would those be the fairly traditional, single-family neighborhoods on the south end (Windsor Park, Northfield, Highland, etc.), or the very different commercial-industrial-apartment neighborhoods north of Highway 183; the begging-for-development corridor along Airport Boulevard to the new ACC campus, or the troubled neighborhoods along Rund­berg (where several candidates are cutting their political teeth with the city's "Restore Rundberg" neighborhood revitalization project)?

Some of these questions have arisen on the stump, and are even embodied in the candidates themselves. Katrina Daniel is a longtime district resident and homeowner (Highland), Anglo, and she's been very active in her neighborhood association and engaged in city and state policy for some time, especially as a nurse/health care advocate. Casar, a relative newcomer (and renter), Hispanic, and a couple of decades younger (in a very young district), is best known for his prominent activism at the Workers Defense Project, working effectively at Council to raise citywide labor standards. They've both been very successful advocates, in quite different veins, and both live at the southern end of D4. Longtime resident nearer the top of the district, Sharon Mays, a Realtor and marketing consultant, is active in the North Austin YMCA and in a park-bare area, helped establish the North Austin Community Garden – and has emphasized finding ways to help residents establish first-time home ownership.

All the candidates advocate affordability and economic development (especially of small businesses), but several more "northern" candidates have focused more strongly on public safety (a bigger issue along Rundberg and 183). And on certain questions – e.g., a proposed homestead exemption on property taxes – a candidate's position may depend on whether she thinks it will help or hurt the large renting majority in the district.

In sum, 10-1 candidates face a chore akin to that of the blind men and the elephant: trying to establish an identity – a sense of place – for a district that is large and various, and exhibits a wide range of neighborhood and demographic characteristics. It's not unlike what happens when Austinites describe "Austin" – what they say may well depend on the "Austin" where they happen to live. The first D4 representative will need a very wide reach, of understanding, to stretch from 51st Street to Braker Lane.