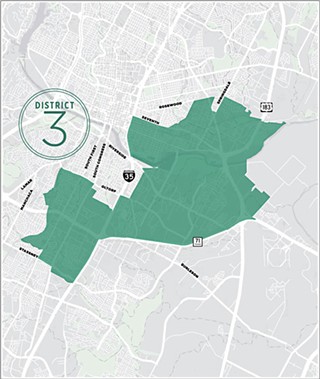 District 3: A Voice on the Dais

As entertainment and event venues and condos encroach on Eastside neighborhoods, and the options for affordable housing appear to dwindle, District 3 residents struggle with maintaining quality of life as well as their roots in the community.

The area stretches over parts of East Aus­tin, north (Holly and Govalle neighborhoods) and south of the river, from Web­ber­ville Road down to Ben White, incorporating Montopolis and the East Cesar Chavez area eastward. It also captures a pocket west of I-35, between Oltorf and Stas­sney (including some of the St. Edward's area). At roughly 17 square miles, D3 is a relatively small but densely populated district, yet from 2000-10, according to U.S. Census Bureau data, it saw one of the largest population exoduses in the nation – the consequence, say some of the candidates, of too-much-too-fast gentrification.

Carved as a Hispanic voter opportunity district, "Hispanics/Lati­nos" (in census parlance) comprise 60% of the residents. Historically, D3 voters haven't crowded the polls – 2012 turnout was 38%, and the low number of registered voters (40,145) could indicate political frustration, apathy, or most likely, voting barriers including noncitizen status. But in 2012, the soon-to-be district overwhelmingly supported the 10-1 plan, evidence that residents would seize the opportunity to gain more representation – the city's "gentleman's agreement" would no longer suffice, especially for the burgeoning Hispanic population. In part, that has translated into a record 12 candidates – the most crowded of any of the 10-1 races.

The dozen contenders are grappling with solutions to "control" growth, while promoting infrastructure and transportation options (e.g., new, or at least supplemented, bus routes). They advocate affordable housing (at all income levels) in the predominantly renter-occupied, mostly poor district, amid the rising displacement of longtime residents, pushed out either by rising property taxes or by buyouts from those looking to relocate to the trendy Eastside and redeveloped Riverside. The still-generic housing ideas are various – homestead preservation districts, property tax relief, more equitable land codes, etc. – to retain those disappearing residents. Yet if candidates indeed hope to tackle "gentrification" – based on the ambivalent undertones of the ongoing forums – the future Council member may first have to determine the preferred meaning of the word.

With so much at stake, voters may wonder if melodramatic infighting and deeply entrenched neighborhood politics will undermine the campaigns. There is an inherent conflict of sibling rivalry – the early presumed frontrunner (based on name ID and visibility, though that could be weakening), Susana Almanza of PODER, is facing off against her brother Sabino "Pio" Renteria, raising eyebrows and making for some awkward campaign moments. A trickle of ethics complaints – two against Almanza (for incomplete finance disclosure, for which she was reprimanded, and another for serving ineligibly on a neighborhood contact team, still under dispute), and one against Fred McGhee (for promoting his book without a required campaign disclosure) – are periodically roiling the waters.

The complaints and the social media war also reflect long-standing neighborhood political rivalries now bubbling to the surface. Almanza is often a polarizing figure – for recent instance, her campaign last year for Council to strictly regulate urban farms caused considerable backlash, including the incentive for urban farm supporter, musician Julian Limon Fernandez, to enter the race. Others apparently filed, to some degree, as Almanza alternatives, vowing to counter her PODER leadership style – criticized as "scorched earth" (alternatively, lauded as liberating).

Paramedic and neighborhood activist Mario Cantu fits that anti-Almanza profile, and that's also some of the background buzz on late-filer Jose Valera, a young but polished Iraq War combat veteran, attorney, and family restaurant owner. Anthropologist and consultant Fred McGhee has pointed to his advocacy for Austin's historic public housing; he's tried to stay to one side of the Almanza infighting that sucked in his campaign manager – but he has also been criticized for his own aggressive and occasionally condescending style on the stump. The persistent back-biting might leave potential openings for returning candidates Shaun Ireland and Eric Rangel.

Who can represent the best interests of the divided neighborhood effectively – and perhaps just as important – peacefully? The answer will likely linger into December; with 12 candidates, anticipate a run-off.